We have two: Baby Wants Candy and Thrones! The Musical Parody.

Baby Wants Candy is a completely improvised musical with a full band. We are a performing group from the States, and as you might know, it’s a wonderful time to NOT be in the States right now.

We have casts in New York, Chicago and LA and we bring the top performers from each city to populate our Edinburgh cast. The band is made up mostly of mad, madly talented local Scottish musicians who we love to death.

We’ve been coming to Fringe forever, and we have a great fan base who come to shows night after night. Since its brand new every night, someone can (and some do) see 20 shows in a row and they will never see the same show twice

At the beginning of a BWC show, we take a bunch of titles from the audience of musicals that have never been performed (some favourites: “Kanye West Side Story” “Tinder in the Animal Kingdom” and “Zombie Lesbians of Scotland”). The audience vote on the one they want to see, and we jump right into doing that show. It’s so fun, alive and immediate for both us and the audience as the show is created in the moment.

Thrones! The Musical Parody returns for its fourth year, and it is, unsurprisingly, a musical parody of GoT. The show revolves around a group of friends who gather to watch the season premiere of Game of Thrones when one reveals, horrors of horrors, that she has never seen GoT before. The other friends take it upon themselves to re-enact (to an original score) highlights of all seven series. The show is updated with new material from last season and beyond.

As an FYI, Trump gets a big ole’ comeuppance in the show.

Both Baby Wants Candy and Thrones! have sold out completely for the past three years, of which we feel very fortunate!

I was doing stand-up on “The Spirit of Chicago”, a cruise ship in Chicago. This was a 4 hour cruise around Lake Michigan, which was about 3 hours and 50 minutes too long.

For my “costume”, the manager handed me a tuxedo with a bright purple sparkling cummerbund and bowtie, a thick band of ring-around-the-collar, and a stench of fermented body odour. Clearly this tuxedo hadn’t been cleaned in a long t…well, probably ever.

I had to go up and do bits between the band doing medleys of whatever pop music was out at the time. At last call, the manager said “Go! Go do some jokes! Tell people it’s last call so they buy booze!” I told everyone to make sure to drink up because the captain had been the whole cruise, and on the way back to port I told the passengers if they looked off the side of the ship they could see the wreckage of the first “Spirit of Chicago”, which I told them sank 20 years ago to that day.

The manager stood behind the passengers waving wildly for me to skip those kind of jokes.

When we got back to shore, I handed them the tux, and a wonderful silent look of understanding between the manager and me let us both know that this was to be my first and last day. No words were needed.

Both of our shows (but especially in Baby Wants Candy as it’s an improvised musical) we depend on fellow actors so much to make the show succeed. The audience loves if we’re being playful and fucking around with each other. So before our show we do all kind of warm-ups to get on the same page and fuck around with each other.

We’ve luckily had a lot of really excellent reviews. And we’ve had some harsh ones. The harsh ones are painful, but after the butt hurt subsides, we can hopefully decide whether to agree or disagree with their assessment.

My favourite reviews for Baby Wants Candy are when the reviewers really seem to get what we’re doing- creating a musical on the spot- and embrace the mad insanity, instant song-making and heartfelt story we’re attempting to tell. The reviews where the reviewer say things like “I had no idea I could love improv so much. I normally don’t even like improv, but I loved this show.”

The worst Baby Wants Candy reviews are the ones that are just kind of middling, or the reviewer just doesn’t get it. An example, one reviewer said “I loved it, but I wish they had more costumes”, which was funny in itself, as we improvise a musical and can’t therefore have costumes.

The best Thrones! review was one that said “Excellent and hilarious…so much better than it had to be.” That’s a great compliment. Even though Thrones is a musical parody, we want the show to be as good or better than anything else someone would see. Doubly so, because the source material is already so good – we want the show to stand out and stand up on its own

Yeah. I think that whether or not you agree with what a reviewer says, it is absolutely worth hearing someone’s opinion of the show.

I appreciate reviews and reviewers. Some actors don’t like to know before (or even after) a show that a reviewer is coming to the show, but I don’t mind.

No. The real criminal offence was him dating a girl with a pug.

No. None. As long as it’s funny and not cruel.

When I spoiled a major Game of Thrones plot point in a Baby Wants Candy show. I felt horrible about that after the show. It was slightly amusing at the time, but it was selfish and therefore not really funny- just rude.

Looking back over your time as a perfomer, tell me about the best gig of your career.

Edinburgh Fringe every year. No joke.

Find Al Samuels on the web - 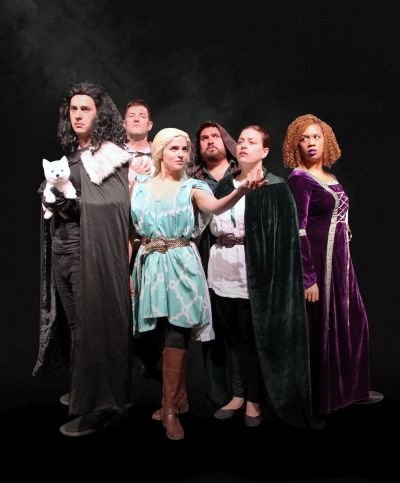 Find Al Samuels on the web -

The worst Baby Wants Candy reviews are the ones that are just kind of middling, or the reviewer just doesn’t get it. An example, one reviewer said “I loved it, but I wish they had more costumes”.