You can tell that Alan Morrison writes for a newspaper: thanks to his journalistic training, the presence of a sub-editor and (quite possibly) the need to accommodate an advert for the Taj Mahal curry house just before his page goes off-stone, Morrison’s reviews are cut to the absolute quick. Not a word is wasted and, I’m happy to say, not another word is needed.

He is a bit of a comedian’s friend, since his opinions all fire out like pullquotes: Alfie Brown is “a man who will sacrifice a punchline in order to quote David Hume”; John Scott will “dive in head-first and punch every hideous [political] sea creature he meets right between the eyes”. Fern Brady has “an everywoman quality about her that makes it easy to agree with her acid observations”.

It’s the balance that separates Morrison from his peers, though: there is always just enough overview, description, opinion and summing-up. And it’s difficult to find a bit of criticism that doesn’t come across as constructive, such as when he tells us that Mr Brown’s “routine about a friend’s new vegan-poet boyfriend is too judgemental for an opening segment and very possibly sets the audience at arm’s length for the rest of the show”.

Abounding in Morrison’s reviews is a sense that he wants to like each comedian and be drawn in. And he really does do his half of the work.

It’s a relief to read these sorts of reviews – and from both ends of the comedy pecking order – in a newspaper that, for too long, has treated the Fringe like God, or infinity, or Anglo-Scottish relations: too big and complicated a thing to get to grips with.

Alan MorrisonWriting for HERALD (Reviewed in 2015) 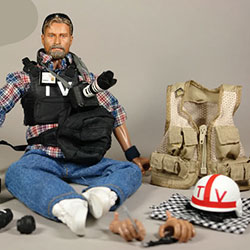