We all like a superfluity of grandiose verbiage. There’s no need to say “superfluity of grandiose verbiage” when I could just say “too many big words”, but I did it and I’ll do it again. So when I read that Lou Sanders’ Excuse Me, You’re Sitting On My Penis Again is “substantively light on penises, and any sitting thereon” I thought I was going to enjoy the work of Matthew Sharpe.

And for the most part I did. When he explains that Sanders tends to laugh at her own jokes, it is generous and considered of Sharpe to write that “It does add to her affable charm, but it also undermines the fluency of her storytelling”. Also I like the description of her “minxy, bashful stage persona”. And when he tells us that Phil Jerrod “segues smoothly between musings, offering amusing perspectives on murder”, the slippery alliteration is enough to send a tingle up the spine of all but the most implacable stuffed toy reviewer-reviewer, would that we had spines.

The thing with Sharpe is that reading one review gives the impression of an assured, urbane and articulate reviewer. But when you read all of them you realise that most of the time he’s just showing off. This is fine so long as we can all understand him, but sometimes it’s just trowelled on a bit thick: Jerrod’s show is “ultimately lacking the chuckle-rate that transcends the saturated market of technophobic satire”. Nish Kumar “relishes the chance to deconstruct his hypothetical opponent’s rebuttal”. Beard “earnestly elevate bare sketches to the point where you get the sense that they’re reluctantly performing someone else’s material”. Big words are necessary sometimes for big concepts. But Sharpe is trying to describe straightforward ideas here and bashing everything but the nail on the head.

There are potted (and unintelligible) breakdowns of comedy genres as if Sharpe is establishing from the beginning of each review his absolute mastery of each concept. “Anecdotal comedy has a tendency to bring the exaggerated set-piece moments to the fore and leave the unshowy minutiae by the wayside,” he asserts for Diane Spencer. “Surreal humour, at its best, can dance the line between logic and farce, keeping audiences guessing as it subverts causal reasoning,” he tells us before picking bits out of Beard. During Eric Meat Has No Proof, Only Memories of Pasta he takes the opportunity to tell us what absurdist humour is, too.

The tipping point for me was in saying that Jenny Bede’s material is “never original enough to derive genuine regalement”. Regalement has not been used, as either a proper or improper noun, for about 300 years, and it does nothing here but sit like a stinking Georgian aristocrat in a rotten borough. Then he tells us that Ali Brice’s audience is “more participatory than spectatory”. Spectatory is not a word and never will be, unless it’s used to describe the sort of person who reads the Spectator.

If Matthew Sharpe has any sense he’ll stop being quite so clever.

Matthew SharpeWriting for FEST (Reviewed in 2015) 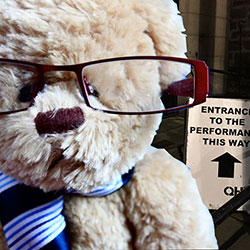