I quite like Donald Stewart. His reviews are rather long but you get the sense that he’s trying to be precise rather than verbose.

He can be very efficient at times – his description of That Pair as “wicked, slick and sick” seems to put them in a pretty good nutshell, for example – but not quite often enough. Sometimes it feels like the more Stewart explains a situation the less I understand. Explaining Nick Hodder’s show he tells us (and I’m copying and pasting here):

“Before we started Jim left, then went the front row before the back row went too. To be fair the back row did arrive after we hadn’t started. They were then were replaced by a family who got there just in time for it to begin. Overall if you have trouble following this then you really had to be there.”

I think Jim is someone who was asked to move. But I don’t know why the bottom-shuffling of the audience before the show started, on one particular occasion, requires the broader public attention. And I would probably still think that if I had been there. He sticks with the audience, though: “…Working as an antidote to that straight jacket means we have to invest in him. Most of us do though Ann in the front row seems to think it is all about him.” Who the hell is Ann? And why is he a he? I mean OF COURSE Ann can be a he if he wants to be, but I’m distracted from the review now.

Stewart makes another fatherless callback while discussing Kirsty Mac’s Feminazi: “I can forgive the tablet being used to show the video as the volume came through the speakers but was wanting to know more than just the story about the boat protest.” I have no idea what the boat protest was. Also, the first and second parts of the sentence have nothing to do with each other.

I get the feeling that Stewart assumes everyone he is talking to has been along with him to see the shows. He-half explains so many things, and makes so many oblique references, that the “you had to be there” comment is perhaps truer than he intended.

He is much clearer when discussing how he feels about shows, and he isn’t shy about sharing his thought process. Donald Stewart’s reviews have a relaxed everyman feel to them where his fandom and his attention to detail shine through. I just sometimes wish that I could work out what he was looking at. 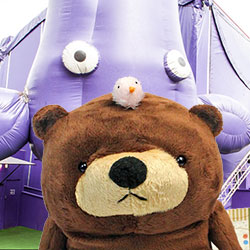