“It certainly does pay tribute to Richard Herring’s comic abilities that the audience was able to leave the theatre feeling strangely uplifted, especially when considering the show’s subject matter.”

Did that sentence hurt your eyes? Welcome to the reviewing world of Robert McGowan Stuart, a chap who never writes more than 120 words, 100 of which will be superfluous. By sticking ‘does’ and ‘when’ and ‘on the other hand’ into pretty much everything, McGowan Stuart creates the impression of a man with his eye on the word count and his brain in a biscuit tin. He treats the English language like a CIA operative treats a Muslim suspect in a dark concrete room.

He writes “[Dave Bailey and Friends] gave a fairly pedestrian stand up set, but laced with some refreshing levels of self-deprecation, it was still fairly engaging”, managing to peddle three reviewer clichés in succession while saying precisely fuck all. Was it pedestrian or was it engaging? Choose, you hack.

All this is rounded off with the sort of analogy that would make Seamus Heaney dig himself up just for the sweet relief of shooting himself dead again. “[Mick] Ferry offered a couple of pints worth of comedy, but kept us sober enough that nobody left early with a hangover.”

This reviewer isn’t at all mean-spirited, or even necessarily wrong in his final assessment. It’s just that when you read his work you forget how it feels to feel. 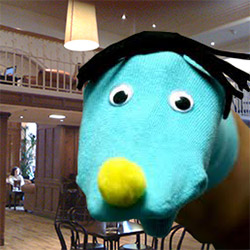