It’s never easy trying to reviewer a reviewer who has reviewed precisely one comedy show in their entire life. Apart from anything, a person should be allowed to try everything once, should they not? I would not dream of grading Liam Speir on his proclivities with one ladyboy or one hit of methamphetamine, or one attempt at being a silver-painted living statue (note: we have no evidence that Richard Speir has ever been a living statue). But Fringepig is a work of completeism, and so it is my onerous duty to divine the soul of Richard Speir from one review. It might be easier if he’d gone to see something off the beaten track, but no – he went to see the Oxford Revue: “a safe bet”, as he assures us – particularly as the show was free.

Richard Speir only usually reviews theatre, and you sense that he dropped in on this very other thing and decided he might as well review that too. Like Victorian missionaries, BB reviewers take their civilising ministry wherever they please. He’s still thinking like a theatre reviewer, appalled that acts not on stage should chat to each other and drink alcohol by the bar. “[It] take[s] breaking the ‘fourth wall’ to another level. Why not just hide behind the bar, or face the back wall while standing still?” he tuts.

Yet this naiveté is welcome elsewhere: “The Butless Chaps are genuinely funny (which I find key to comedy)” he explains, helpfully. “Although it was a pity about the tough crowd. The act deserved more of a reaction than was offered, especially in the beginning, and they did very well without a decent audience to bounce off.” Well, that’s the sort of observation we could do with more of, frankly. Most reviewers treat the crowd in the room as a faultless jury; twelve good men (or women) and true – even though twelve is way above average for shows in 2013.

On the whole, I’d be happy to see Speir write some more reviews, if only because it would mean his colleagues writing rather less. 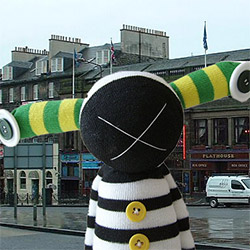