When Polly Davidson says that “At least [Tony Law] is definitely funny”, she pays him scant credit. This is the only thing she is certain of in the entire review, and even then she keeps it until the end. His comedy is “all over the place”, she reports, wielding critical insight with all the dextrous grace of an octopus with a toffee hammer.

In most of her comedy reviews Davidson isn’t quite sure what she’s doing there. She po-facedly reports that a show titled The Worst Show On The Fringe, comprising acts with terrible reviews, isn’t quite as brilliant as she would have liked, and reflects that “the title does it no favours”. Davidson does not understand pathos, or bathos, or wry reflections on the art of critique that she so blithely commits herself to. If you were to explain to Davidson that the people in this show were trying to make the best of what people like she herself had said about them, Davidson would probably have screamed in agony as the burning light of Revelation set fire to her eyes and gone running through the Royal Mile like a terrorist at Glasgow Airport. And everyone would have looked at her and tutted.

I’d like to say that theatre reviews are more her forte, as she has done rather more of these, but in truth they appear little better. When she states that “I Guess If the Stage Exploded is like nothing I’ve ever seen before” I could not help but wonder how many other things she had to compare it to. I’m guessing a shared flat in Marchmont, a cot and the inside of a womb. 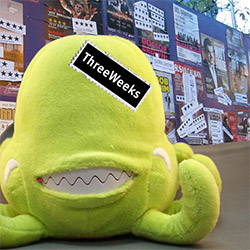