Is the world just wrong? Or is Nina Keen just wrong? Because one of the two MUST be wrong.

Nina Keen is not averse to the reviewer-speak standby of saying that a thing does or doesn’t “live up to its title”. So excuse me for saying that, whether she is wrong or not, Nina Keen does not live up to her title. She is not very keen on anything much.

Her lack of enthusiasm is most pronounced on anything – and I mean ANYTHING – that transgresses her sense of propriety and polity. So Simon Munnery’s joke about his daughter “was strangely reactionary as well as deeply uncomfortable”; Daniel Nils Roberts’ “one female character was uncomfortable too; the pathetic erotica author felt rooted in sexist tropes”; Michelle Wolf has “retro misogyny and homophobia, with a dash of transphobia and ableism thrown in. This is confusing, because I could’ve sworn we’d established this was unacceptable ages ago”. Consistently Keen is confronted with things she doesn’t like politically, and these cause her discomfort and confusion. She is unable to separate her own feelings from the requirements of objective analysis. Her conclusion is always that a show has hurt her personally, and so it must be punished. No lapse from Keen’s playbook of social acceptability can be tolerated. Adam Rowe, for example, “used his own weight to justify a fatphobic routine that was at the expense of others rather than himself”. How dare he? Doesn’t he know that comedy has RULES??

This could all be written down to youthful idealism if it were not for the frankly juvenile outbursts. “We, the audience, have feelings, and violent and demeaning jokes fucking hurt.” We can only suggest (assuming that it is Keen who is wrong, rather than most of this year’s Fringe), that Keen put a trigger warning on everything outside her window and not venture beyond it until she can deal with the actual world. Because if there’s one thing the Fringe doesn’t need it’s any more of this Student Union pisswank that seeks to invalidate anything that doesn’t toe the line of insipid subservience to a single line of reasoning.

Keen admits as much when she gives Chris Coltrane four stars for defending political correctness in his show. Correct score for Coltrane’s show, I grant you, but wrong reason. Stars mean little enough already, let’s not turn them into goodie tokens for people we just happen to agree with. 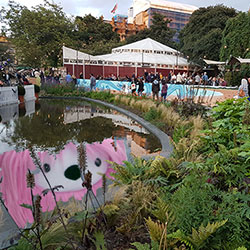