What is going on at Fest Towers this year? Last year their average score – AVERAGE – was 2.3 stars. This year it’s like opening a box of glitter. Maybe they realised nobody likes them. Maybe it was starting to hit their bottom line (would you buy an ad in a magazine that had called you a talentless so-and-so? I wouldn’t, and I’m an elephant so, you know – pretty thick skinned). We can only speculate, can’t we? But for whatever reason they’ve put in a skylight and let the sunshine in.

One of their new sunbeams is Jonathan Holmes. His style is so fresh and bouncy it’s like taking cotton sheets out of the tumble drier. “Many comics would get disheartened when a quarter of his audience leave halfway through, but Andy Field only gets funnier,” he writes of a gig where he’s one of three people left watching. Is he trying to prove a point, maybe that a good critic can sniff out funny in a vacuum? Well I don’t think so. He seems sincere. Of Ed Aczel he writes that: “Everyone needs to see Aczel at least once in their life, because you’re already living through one of his routines,” which seems as heartfelt as it is a bleak appraisal of the human condition. “It’s like wonderful torture,” he adds. “Joe McCarthy as a pub bore”.

In Ari Shaffir’s writeup, Holmes goes on a bit of a sentimental journey in which he attempts to compare the meaningless, loveless fun promised in the show’s title with the sweaty encounters of those who will be on the pull once Shaffir’s venue becomes a nightclub later on. It’s a little bit tortuous but Holmes just about gets away with it due to his tight turns of phrase: “His visit to Anne Frank’s house threatens to be significant. Then it isn’t.” Similarly his observation that “The astute joke at the centre of Holly Burn’s latest bought (sic) of mania is to collide precociousness with Hollywood glamour” threatens to spill over into verbosity, but then doesn’t. It’s all just about right. I mean it’s a pity he didn’t spell the word ’bout’ correctly but then this is Fest, not The Times. Anyway, Holmes is a measured enthusiast.

But none of this is particularly important. What is important is that Holmes looks at everything, gives it a chance to breathe, and then considers it on its own terms. This is a rarity at the Fringe and like trying to find a pink okapi, frankly, in the back catalogue of Fest reviews. Long may it continue.

Jonathan HolmesWriting for FEST (Reviewed in 2016) 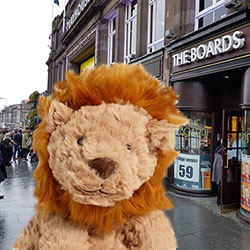