Reading a Simon Fearn review puts one in mind of one of those QVC infomercials where they have 20 minutes to fill and only a set of Tupperware beakers to talk about. Fearn covers every angle, in the most plodding way, almost as if he’s got one eye on the word count to see if he can stop yet. Meanwhile he’s not really telling us anything.

“His punchlines tend to be clever and original, and the tone is amusingly downbeat,” he says of Alex Kealy. They ‘tend’ to be clever and original? Surely they ARE clever and original, or else they’re not? I can’t see where ‘tend’ comes into it. And how is a downbeat tone intrinsically amusing? Of Zac Splijt’s LJ Da Funk he opines “The persona allows Splijt to get away with punchlines that are sometimes convoluted and sometimes outrageous, swapping the more anecdotal style favoured by a lot of stand-ups for surreal, bite-sized routines, often pitched a healthy distance away from reality.” What does any of that mean? What is a ‘healthy’ distance away from reality? I still don’t know whether this guy is any good or not and I can’t see what’s different about the act Fearn has seen. If Fearn had been ordered to write a review without giving anything away he probably couldn’t do much better than this.

Fearn ticks off all the tropes of lazy reviewing. He makes the fatal error of pointing out that one act may not be the best thing to see “with so many stand-ups at the Fringe” but that “For a free show at midday in a small venue though, you could do worse”. Similarly “Newcastle Brown Male is the perfect choice for a late evening comedy gig”. When he states that “Kealy’s stand-up is still better than most and always enjoyable” he sounds like that person in the audience who hated it but really wants to say something nice. His reviews stop just short of “imagine learning all those words” or “I could never get onstage like that”. It reaches a head in his bizarrely detached summation of Lana Schwarcz’s Lovely Lady Lump about her experiences with breast cancer: apparently she “deserves credit for sharing a terrible experience in a relatively light-hearted tone.” Yes. Have some credit, Lana. Go on, help yourself to credit. I’m not going to tell you exactly what sort of credit you’re getting, Lana, because I don’t want to get involved. But the credit is over there and you are allowed to go and get some with a spoon. Not too much! That credit is for other people too.

All of this round-the houses pedestrianism might be fine if his reviews were appearing in the Llandudno Argus detailing the town hall entertainments for pensioners, but when talking to the most comedy-savvy audience in the world it’s not quite what we need.

Still, you can’t say that Fearn isn’t fair since his piece-by-piece show autopsies invariably leave no part of the  carcass uninspected. What’s more, he always tries to find something he likes, even if that does tend toward trite “on-the-whole-it-was-great-though” conclusions. To conclude in Fearn’s own style, there are much better reviewers out there on the Fringe, but for a quiet bit of reading reviews while sitting in a puddle of warm swarfega, you could probably do slightly worse. 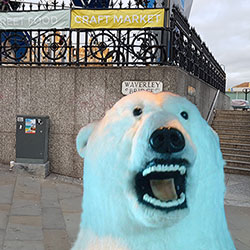