There is nothing wrong with Milly Reilly’s reviews from a comedian’s point of view. She’s fair, she’s exacting; she goes through everything point by point. You won’t find her going all hatchety on anyone’s ass.

There is, however, no real point getting a ticket to anything she reviews as she will have explained everything you can expect to see there in explicit and sometimes quite exhausting detail. If you imagine the Berliners knocking their wall down, described by an accountant more concerned with how many bricks are missing than the historical moment, you’ll have an idea of how her writing tends to suck the immediacy and joy out of everything she describes.

Slaughterhouse Live, for example, relies for much of its humour on the names of its bizarre characters and the expectations that are confounded when you meet them. Without the element of surprise you lose a fair bit. Yet Reilly names each of the characters, explains why that’s an inappropriate name and / or job for someone to do and then says why that’s a funny or not so funny thing. And then she moves onto the next. And the next. After reading a couple of her reviews I didn’t just not want to see the things she was talking about. I didn’t want to see any comedy at all, ever again.

This came to a head in her description of a podcast show with drop-in guests, in which she spent 170 words scrutinising, assessing and fuming at the unscripted banter of three guests who, it appears, were just trying to kick back and enjoy themselves in a conversational environment, and were not aware that their every word was being assessed with all the focused fury of a Guardian comments writer watching a Nazi on Question Time. She was oblivious, too, to the fact that none of these people were likely to appear in the show again and so telling us all about them was as pointless as… well, as pointless as me telling you about her telling us about them. 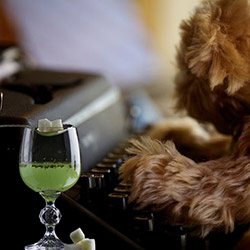