Kathleen Sergeant is by no means a bad writer, in fact she’s probably one of the better ones at this particular publication. Everything she writes is cogent and considered. It’s just that it’s a bit boring.

Sargeant has a way of describing things she has thoroughly enjoyed in such a way that they seem the worst way you could possibly spend your time. You wade through stiff, tangled paragraphs that go on for far too long, to emerge at the other side vaguely surprised that they conclude with the words “is particularly hilarious”. Of course by now you’ve forgotten how they started.

Billy Bongo reading the telephone directory, from A to Z, making sure to read all the names that begin with all the letters in between, taking 58 minutes to do it, in a phlegmatic monotone, “is particularly hilarious”. Danny Donut pretends to be a bacon sandwich and sits there going cold and stale. “It is totally worth seeing this show if only for this sketch alone”. That sort of thing. Not what I just said, but that sort of thing.

It’s not as if she doesn’t have enough to talk about. Her review for Simply the Jest ends with “[there is] just enough nudity to suit everyone’s tastes”. Whoooah, what? Nudity? And you never even mentioned it til the closing sentence? No, because Sergeant was too busy explaining exactly what happened in a dull dot to dot fashion. There wasn’t time to say that you could see cocks and bums and that.

This writing style means that her attempts to be cheeky and chatty jar slightly: “Let’s be honest, who hasn’t woken up with glitter on their private parts and no idea how it got there?” If only reviewers had audiences, so they could hear them groan.

That said, once you down some strong coffee and read the review a couple of times more, it all becomes a bit clearer. 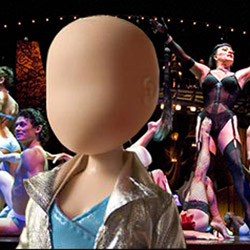