One of my personal bugbears is the reviewing practice that, in the process of appraising a thing, slates something else that’s entirely unrelated. “This thing is even worse than that thing”. Reviewing Alexei Sayle, Kai Sedgwick says: “With the passage of time, a rose-spectacled audience has a tendency to romanticise the past. That’s why bands like Shed 7 and Dodgy – that were bad enough the first time round – can reform and tour the country. Goddamn nostalgia.” By lazily assuming negative consensus on Shed 7 and Dodgy, Sedgwick undermines his credibility in judging anything on its merits.

He doesn’t help himself by wearing his ignorance on his sleeve, either. “Alexei Sayle isn’t a band … and by all accounts he was Kind Of A Big Deal back in the day.” He goes on to preface other statements with things like “17 years ago, by all accounts”. You have to wonder: Did Broadway Baby not have anyone available who properly understands the work of Alexei Sayle or, failing that, was at least ALIVE at the time of Alexei Sayle? I’m not being an inverted ageist; it’s just boring listening to this bloke bang on like a student tour guide at some Roman remains. Either do some research, or just get on with reviewing the fucking show.

Sadly, Sedgwick believes himself to be very, very witty, and so keeps inserting bons mots like “Houston, we have a problem”, “Like a demented Jimmy Carr on Ritalin” “verbal bukkake” and “the Krankies riding Nessie into the Tunnock’s Tea Cakes factory while high on smack”. These don’t always work as well as he believes (for one thing, Ritalin calms hyperactivity, so seems to contradict what he’s trying to say here). Also, he keeps using the word ‘evincing’. Everything he sees ‘evinces’ something else. To demonstrate: Kai Sedgwick is not as good with words as, say, Rick Witter from Shed 7, as evinced by his overuse of the word ‘evinced’.

He tries to end each review by saying something positive, often in complete disharmony with the drubbing he’s just delivered. One theatre group he dislikes should “dust themselves off and try again next year”. And Alexei Sayle, as it turns out, is actually pretty good in Sedgwick’s opinion. In fact, “today he’s as relevant as ever”. 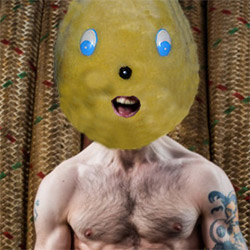