Megan Dalton makes sense most of the time, but occasionally reveals her youthful inexperience by going off half-cocked at nothing very much.

For example, her discussion of Baba Brinkman’s The Canterbury Tales Remixed has some lovely observations and deft turn of phrase, such as “the use of mediocre cartoons limits rather than expands the world Brinkman’s words depict”. However we are told that it occasionally turns “cringeworthy” without ever painting a picture that we can cringe at, and her conclusion – that it is impossible to recreate the bawdy impact of 14th-Century literature because we are all so unshockable now – seems remarkably blinkered to anyone who knows anything about society at that time. (Finding out you have bubonic plague must have come as a bit of a shock.)

Dalton has written a contender for this year’s biggest stinker review, saying that Randy Ross’s The Chronic Singles Handbook is “of use only if you desire to learn how to repel women, and indeed people in general”. It’s “misogynistic bullshit,” at which we’ll marvel at the comic’s “incapacity to understand or treat women as human beings”. Well luckily Ross put the whole show online before the Fringe began (why? He was selling tickets!) so we could watch it ourselves. Ross is not the monster he appears in print, it’s just the sort of story where a ‘date’ who is clearly a prostitute to everyone listening turns out half an hour later to be… aaagh! A prostitute!  I agree with Dalton that the bit about mouth fucking is a bit much, but it’s always better – for the act as well as the public – to explain revulsion, not act it out. Dalton interprets a quiet audience as sharing her opinions about Ross’s attitude to women. But she forgets her primary objective: to judge what’s funny. If the audience is silent then there’s a more pressing problem than sexual mores and gender politics.

Dalton is excellent at potted summaries. This is a great first paragraph: “Health and Happiness Guru to the Stars Marijana (Gabby Best) takes her audience on a journey to find themselves. Instead, they find themselves faced with a character whose overconfidence, thinly veiled loneliness and peculiar mannerisms are anything but conducive to inner peace in this clever character comedy”. I feel I know what this show is about, and why I should see it. And I’ve only read one paragraph. But Dolan cannot quite maintain this discipline and starts to ramble and repeat herself as her reviews near their uncertain end. In fact, her Randy Ross review is a relief in that it doesn’t wonder to itself where it’s going.

Apart from when she’s knifing someone, her stars don’t always seem to reflect what she has to say about a show – although that’s probably also true of almost every reviewer who has ever been born. 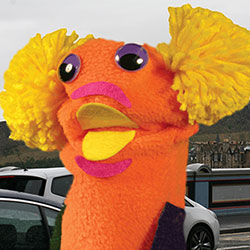