“…And this is an improv nerd speaking.” Says Allen at the end of his review for What Does The Title Matter Anyway?. It’s unnecessary, because we had all figured this out much earlier in the lengthy review that preceded it.

Allen is, I might as well admit, a reviewer after my own heart. Not only does he have his ‘thing’ in improv (okay it’s sodding improv, but still, it’s good to have a thing). Particularly because Allen straddles that line between being a fanboy and a normal person. It’s a relief to read a line such as this for Catriona Knox: “It’s difficult to over-state just how fun this is for everybody, the entire room feeling like a bunch of mates being allowed to stay up late, playing silly games.”

At the same time his love for his thing makes him get snotty with other reviewers: “Another cliché of improv is that churlish reviewers will never be able to quite accept that it really is made up on the spot. WDTTMA? Puts the lie to that”. It’s good to have a reviewer who understands just how dolorous the tropes of reviewing can be.

The problem with Allen’s empathy (if there is one) is that, in seeing the nitty-gritty of a performance AND the broader picture, he kind of misses out the mid-shot. So, although his review of Catriona Knox is passionate and engaged, we don’t really learn much about what to expect from the show except that she spends the hour playing characters (and the first one, according to Allen, is worth the entrance fee by itself).

Overall this is grist to my growing contention that theatre reviewers are much better at reviewing comedy than so-called ‘specialists’ of our own field. For a start they are far more concerned with the provenance of a show – in Allen’s case the legal wrangles behind the show that wasn’t allowed to call itself Whose Line Is It Anyway?. Scarcely any other reviewer paused to contemplate this, but it’s interesting and gives rise to some nice phrases – such as, concerning the rapturous audience, “This is the show that they loved in all but name”.

I think the problem is that many comedy ‘experts; – unlike Allen – take comedy far too seriously. The theatrical types never forget that a show is entertainment first – politics, envelope-pushing and moral challenge a distant second.

More about comedy from this chap, please.

4 and a half stars, Catriona Knox, FringeReview, Mister Kipper, WDTTMA?, What Does The Title Matter Anyway?
Previous Reviewer-ReviewJacqueline Thompson
Next Reviewer-ReviewMegan Dalton 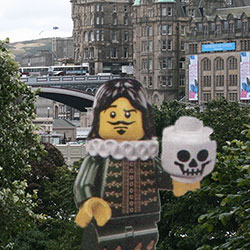