I imagine there are scenes of panic and frustration at the Fest office. If they have an office. I imagine editor Evan Beswick stomping down a damp, fluorescent-stripped corridor, its carpet tiles curled up at the corners like tobacco leaves, knocking over sick, brown pot plants with his elbows shouting “Ballard! Five stars?! What is the meaning of this?!”

Well, Ballard has seen something extraordinary. “Some comedy sets are like machines,” he reveals. “What sets [Alex] Horne’s show apart is that he’s … casually assembling an actual, non-metaphorical machine out of planks and ladders and traffic cones and clockwork mice and audience members.”

What’s more extraordinary is that Ballard is one of those reviewers – and there are plenty of them being pulled from the earth at Fest’s Eisengard orc forge – who you would think incapable of giving a good review until he finally goes and writes one. “Watching [Alex] Horne perspire gently as he eases a belt around a balloon without allowing a nail to burst it prematurely — all while miming a song about a horse — defies belief,” he says. So at least we know that it is possible, and we know what we have to do to get five stars out of this strange cove – defy his belief.

Horne has always been a five-star act as far as Fringepig is concerned. But perhaps the irony here is all on Ballard. Because I think the machine Horne builds each night – whilst pretending to be a ‘Rube Goldberg’ device made to ring a bell – is actually a Fest-Reviewer Distracting Machine. Ballard, like many of his cohort, is so concerned with the physical faults of the actual machine – the audience shout “warnings when somebody spots that the belt has slipped off the balloon” – that he forgets, for one moment, to scan the mechanics of the show for leaks or inefficiencies.

This is something of  an obsession for Ballard. His whole approach to reviewing is not to sit back and enjoy the ride but to take the wheels off, dunk them in cold water and look for bubbles.

The fact that the Internet is a good place to find funny captions “threatens to undermine” Hannah Gadsby’s show The Exhibitionist in which she captions revered paintings. John Robins is similarly compromised by a joke about a female “archetype who lives [only] in magazines”. Pippa Evans’ character show is dented by Loretta Maine being a better character than any of the characters she’s doing. Ballard looks over a show like he’s buying a car, sticking a magnet on the metalwork and kicking the tyres. It’s exhausting. When he says “it’s hard to escape the feeling” that something in a show isn’t working, you sense that it IS actually quite easy; you sense that there’s a clear gangway to a well-marked emergency exit from that feeling, but Ballard, like his Dystopian namesake, would rather let the fumes of disappointment overwhelm him and then write some Eeyore-like remark to the effect of, Oh well, why did he ever expect anything more?

But now we know: Distract the Fest reviewer with a machine. It confuses them. TEN stars to Alex Horne for working this out.

Ed BallardWriting for FEST (Reviewed in 2014) 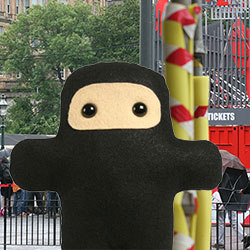