Mathew Tansini writes as if he knows a lot about comedy. His convictions are such that, if you knew less about comedy than Tansini, you might well be taken in. But to know less than Tansini you would need to be from a place that doesn’t understand stand-up comedy, like Afghanistan or the Isle of Wight.

So secure is he in his convictions that, of Adrienne Truscott’s Asking For It: A One-Lady Rape About Comedy Starring Her Pussy and Little Else!, he writes “I was so ready to tear this show down. I had essentially already written the review, I was only really going to the show for validation”. He then seems to expect our admiration that he changed his mind. Sorry, Tansini, but nothing doing. I’m shocked you have the effrontery to admit to such ignorance.

His other misassumptions include the belief that Tom Stade lives stateside and that Lewis Schaffer is a character act. And so he prattles on for several hundred words having accepted his own premise, never once breaking off to doubt or qualify himself, or maybe (perish the thought) do some research.

Tansini writes like a teenager (whether he is or not I couldn’t say), but there is far too much of him saying how bored he is and how much he had to glance at his watch. His being bored generally provokes a one-star review; you sense that having Tanisini in your audience is like being asked to tap dance for an over-indulged child. But then he wouldn’t be the first Broadway Baby reviewer to turn into King Joffrey at the sniff of a notebook and pen.

Yet it’s not all bad. He does seem to appreciate bravery and candour, from Geoff Norcott’s vindication of budget cuts to a Scottish audience to Sam Avery’s fifteen minutes of fame and failure in Rock and Dole. He certainly has the right instincts to review comedy. It would probably serve him better to moderate his opinions with reminders that they are just that: opinions – not the unalloyed truth. And do some bloody research. 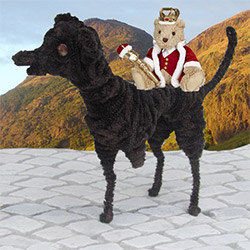