While each Fringe is full of moaning shysters who can no longer be turned on by anything the world has to offer, it is also full of grateful rubes from the provinces who will sit through just about anything and convince each other they’ve had a grand time. That’s sort of what Milton sounds like when she damns with faint praise or castigates with softened blows: “Whilst the material on offer is not particularly original, the show is well structured and [the comic] is generally likeable”.  “All in all, I felt a lot of [the comic’s] better material was hampered by the tense atmosphere he created for himself”; “The material is very funny and, I think, with a bit more structure this would make a great show”. Sometimes Milton sounds like a loving mother who wants to give encouragement but doesn’t want to be dishonest. “All in all, too inexperienced to do a Fringe run quite yet” she says of one young troupe (she does say ‘all in all’ a bit too much).

However, she does spell out the actualities – like, she’ll say she didn’t like that the act made no eye contact, or there was too much corpsing. Thus she writes about what she saw. Most reviewers these days make few notes, then write a review about their memory of a feeling about a thing that they saw.

For this reason, I say that you can trust Lizzie Milton, even though she keeps shooting Free Fringe acts in the legs with her two-star critiques. But she does at least explain herself to them as they writhe in the dust. 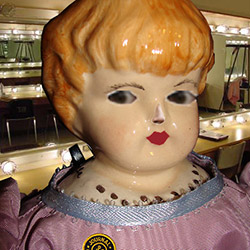