“A young lad with a winsome demeanour entered the room and high-fived everyone in the audience. Immediately I liked him.” Ugh, why do people write like this? Were they brought up by mongrels on a bombsite, living in an overturned wheelbarrow without pens or paper? I mean, WHY?

It gets worse. “I for one liked this routine,” she says. “It’s as if perhaps this is the crux of his raison d’être.” The what of his fucketty what?!?

Now, just read this wrecking ball of a paragraph: “Like Rob Auton, I’m Yorkshire born and bred so I speak as I find. So let me say from the outset that The Sky Show is as ace as a deck of cards missing all its cards save for the four aces. As Fab as one of those lollies from the ice cream van when you were knee-high to a grasshopper. As brilliant as the town in Alabama called Brilliant.”

I don’t know where to start. I mean, it’s good that Brooks is being creative, I suppose, and coming at her reviews from skewed angles. And I’m glad that she can give such lucid expression to her joy at seeing a good performance. But I’m just glad. I’m not, for example, as glad as a massive old people’s home where all the people are dead except the women called Gladys, which has been shortened to Glad. There’s something about this relentless mix of tortured analogy, dull idiom and florid attention-seeking that really jars. Or, as Brooks would have it, jars like a massive glass factory that makes containers for jam.

The worst of it is, Brooks has bestowed upon herself the honour of inventing new words. “Mellow humour punctuated every now and again with a dark interrobang”, “He’s cumulonimble when it comes to understated” and “energetic punadulterated wordplay” are but three passages that had me wanting to squash her like a big moth between a dictionary and a thesaurus. There are plenty of words in those, Nadia. Use them.

Sorry, but I’m from the Scabies Plague Monkey Biological Reservation, and so I speak as I find. 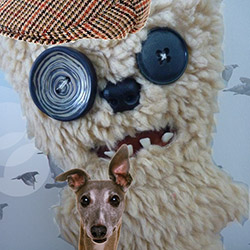