Laura Hutton’s prose style is best described as ‘plodding’. It’s like a fat man walking down some uneven steps in a thick mist with a low-powered torch.  Hutton is always looking at what’s directly in front of her, holding onto the handrail of tangible forms: This happened, then this happened (liked that); this happened, wasn’t so keen on it, it ended.

Whether Hutton is unwilling or unable to draw her observations into a broader overview is unclear, but she seems content to just tell the reader what she saw, followed by some folksy, and usually quite pointless, aside. “We are even treated to a spot of spoken word, the hip and modern way to rant,” she says of Carly Smallman.

It’s with reviewers like this that you start to see why the much-debated star system came about: some reviewers are actually so ineloquent that without the stars we would be left none the wiser about how they felt. So vague are Hutton’s musings that even the theatre piece Emelie Autumn, which she awards only one star, actually sounds rather good from the writeup. Only Severe Blether Warning gets her unambiguously cross.. “I’m fairly sure a monkey could stand on stage and make fart noises,” she says – not realising, perhaps, that such a show would be a strong contender for, at the very least, the Amused Moose prize.

I’m fairly sure a monkey could write a better review. Oh hang on – one just has. 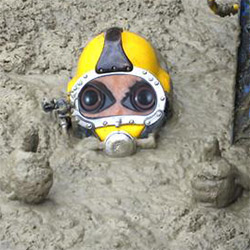