You only have to look at Kanza Marland’s photograph, staring at the reader from somewhere between contempt and constipation, to guess what this reviewer is all about. Once you see it backed up by Lauren Cooper-esque headlines like ‘Unbothered’ and ‘Hardly Over-Powelling’ (for Russ Powell you see), you realise that Marland has all the hallmarks of the archetype wet-eared review thicko nobody wants coming within a thousand miles of their show.

She has a pronounced tendency to say the same thing three times – ‘thought-provoking’ is one of her favourites, though she never reveals what thoughts have been provoked. This came to the fore when reviewing Katie Mulgrew, criticising her tendency to dwell on a joke too long with no less than five synonyms in one paragraph: “bit long-winded”, “a bit waffling”, “needing some good editing”, “quite repetitive”, “often summarising and recapping what she had just said slightly unnecessarily”. What Marland lacks in wisdom she makes up for in irony.

Marland believes everything she sees, and cannot be trusted to draw any conclusions beyond that. So the least said of her review of Phil Ellis – in which she was convinced that everything that went ‘wrong’ in the show was real – the better. But I’d advise Broadway Baby not to send her to a magic show, lest she hammer out 200 words about witchcraft and watch-smashing. 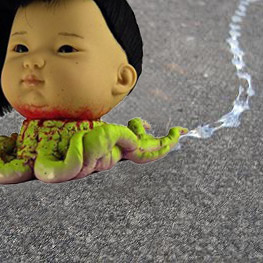