When the audience isn’t getting it, be assured that Kate Pasola definitely IS. And when the audience is lapping it up, then Kate Pasola is not. Or perhaps she is, but in a very different way. At any rate, she takes great pains to tell us that she is having a very singular experience, unlike the rest of the crowd.

“I think Paul F Taylor is really funny,” she begins her four-star review. “But oddly, a lot of the audience didn’t.” So far so good – we all adore a reviewer who can see past the dour moods of indifferent crowds. Pasola finishes by concluding that Taylor is for those with a “refined sense of humour”, which may well be true but does rather point to a habit of pedestaling herself that is a bit of a bad habit with this reviewer.

Watching Bog Standard Britain, she’s amazed at how much the audience are enjoying it. They all “laughed blissfully” because it was “obviously absolutely hilarious – to them.” Not that Pasola hated it, you understand. She “tittered appreciatively” and noted the “political correctness”, or otherwise, of the sketches, because she was much younger (and so much, much wiser) than the rest of the people. They were probably just pleased to be let out of the care home, we suppose. Anyway, it’s clear that telling us all that Kate Pasola was enjoying it in a different way to everyone else is more important to Kate Pasola than describing what the performance was actually like.

Pasola also went to see Daly’s Comedy Club and there she REALLY disagreed with the audience because they were all talking about her cleavage, or something. It’s hard to know exactly what is going on in her reviews, but it’s clear that Kate Pasola the person is getting in the way of Kate Pasola the reviewer.  She even takes it out on other acts on the same bill even though they had nothing to do with the cleavage incident, stating, bizarrely, that they “felt threaded with a similar cotton”.

I couldn’t possibly comment on Pasola’s cleavage, but she really needs to find some sort of support for her massive head if she wants to be a good reviewer. 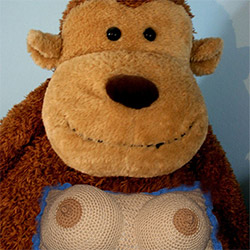