She seems to enjoy reviewing, and this shines through in her prose. She may occasionally get over-enthused and say something confusing. Catherine Semark, apparently, talks about “our international obsession with drawing the cock and balls symbol”. I think I know what you mean, but I’d like to be sure. It sounds important. Similarly, Rory O’Hanlon “makes no attempt to shake off his self-confessed, stereotypically Irish appearance”. Dammit man, make an effort! I don’t mind people being Irish, but they could at least give their appearance a shake.

One gets the feeling that the mealy 120 words allowed in a Three Weeks review cannot contain Head’s enthusiasm. Apparently she was “particularly keen to witness a raw dose of comical craziness this summer” and “drinks an excess of coffee”. Yes, this shows. Still, better this sort of ker-ay-zee ebullience than the seen-it-all drawl we get from many of the bright-eyed youth that are Ms Head’s peers. 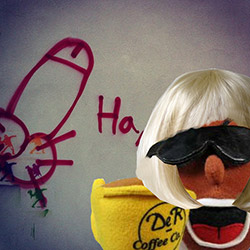