Joseph Trotter has a breezy style that is often refreshing, like when he just says that something was “great fun” or “lovely stuff”, because it’s Three Weeks after all and there’s no room for essays. Sadly, he sometimes uses that breeziness to be evasive or a bit too clever.

“Four names you may not yet have heard of, and four names you may never hear of again,” he said of the Comedy Reserve. Ah. Well thanks for that. “I think there were jokes about children, food, aliens, lesbian dogs, something,” he said of Eric Hutton. “He had a tendency to mumble”. Maybe, but my money’s on you just not listening, Mr Trotter.

Indeed, Trotter’s entire style is sometimes that of a belligerent teenager who, having rolled out of bed at noon, has been told to review a show before he’s allowed to borrow the car, or have friends over, or get money for trainers, or lock himself in the bathroom with mum’s Cosmo. Many things are “hilarious, but” with the “but” being that Trotter didn’t think the performance was energetic enough. Yet, when he likes something, his reviews are quite lyrical and even pleasant to read.

His review last year of Rubberbandits is one such paean; he seemed to have enjoyed writing the review as much as being there. He even gets an extra star off me for spelling “toe the line” correctly. And another for understanding Will Franken. Sadly he loses two for saying that Mat Forde’s Political Party “really hits the Marx”. Das Krapital, Trotter! 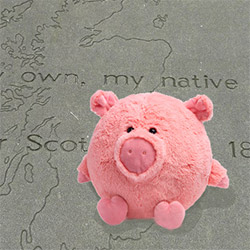