Someone needs to buy Josephine Lane a thesaurus. Her sentences have a tendency to repeat words, and even phrases, to the extent that it becomes a bit jarring. A review of Andrew Maxwell had the word “audience” three times in one sentence. Still, at least she didn’t say “punters” or “bums on seats”.

Perversely, though, it’s Lane’s spoon-blunt, not-trying-too-hard style that makes her a lot more readable than most of her colleagues. “She is no comedian,” she says of one act. “She is the type of person who would make you laugh in conversation, but that is it.” She helpfully adds: “perhaps a posh English accent would have done the trick.” It’s like having your teeth knocked out with a brick and then being told “You wanna put some Bonjela on that”.

She has no qualms about saying what is, or is not, comedy, as if comedy was a nightclub on Watford High Street, and she was working the door. And her rules for who gets in are just plain odd at times. Of Pete Johansson she tells us “His material was often too genuine to be funny”.  Eventually she can’t take it anymore and shouts “A warning to all of you out there who want to try your hand at story-telling comedy: please have a story.” Well that’s us told.

So, to repeat, she’s not Hemmingway. But you can’t accuse her of pretension either. And when I read Lane’s reviews I imagine her typing them into a battered Imperial while eating a bag of chips. It’s a very no-nonsense and muscular prose style; unpolished but rather honest. I can’t help thinking that I believe what she says, and she does say it very directly. 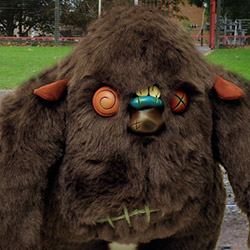