Oh, Agnes Chambre. Agnes Charm-breh. AGNES… Chambre. Did any name evermore deliciously combine the apparent and the other? The matriarch and the madame? The kitchen and the bedroom? The no-nonsense and the funny business? If I could be reincarnated, as a woman, I would definitely call myself Agnes Chambre. Or even Agnes Chamber. A chamber of Agneses. (Please just write the fucking review – Ed)

This Agnes is all business. She bustles about her review like a mother superior, commending and chastising in equal measure. Perhaps she is Agnes of God. Or a sister matron. Or a headmistress. Or someone to be reckoned with in an old-fashioned department store (like Agnes Towling). She’s quite bossy and stern, but never unfair.

Chambre shows, if anything, just how imperious our expectations are for the poor old Fringe these days. Vampire Hospital Waiting Room – Free, is a free show, and so at pains to impress its freeness upon you that it’s in the title. So we should be pleased that “This show is a treat … Every few seconds you are doubled over with laughter, or grinning in adoration at the beautiful vocals of the talented cast.” Yet still Chambre has “quibbles” – “The dancing in the original number was slightly out of sync, which seemed sloppy and there was some corpsing.” One imagines Chambre saying “The Free Fringe is meant to be fun for ME, not for YOU!”

Discussing Ian Smith, Chambre highlights an early unsuccessful joke with yellow neon pen and red capital letters in the margin, before conceding “Fortunately for Smith, this early failure bore no resemblance whatsoever to the remaining 57 minutes”. Similarly she feels personally affronted by Mark Thomas hating young peoples’ “hope and orgasms”, but he too earns redemption “during the rest of the show”. So acutely is each slip, fumble and strike assessed by Chambre, performing for her must be something akin to playing Let’s Dance in front of a Wii sensor. And the Chambre goes wild! And the Chambre goes Booooo!

Anyway, she writes quite nicely. she’s the guv’nor. Or governess. 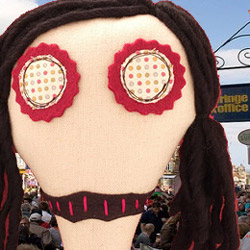