Joanna Alpern writes long, carefully-considered reviews, and always gives the performer – famous or obscure – sufficient due. You might say that she is from the Julian Hall school of comedy reviewing, which is no bad thing.

If anything, Alpern goes into too much detail. But it’s forgivable in her case as she tries not to give the game away, instead taking us on an undulating journey of her likes and dislikes throughout the hour. The pattern is usually very similar: this act is this, and succeeds at that, and what’s REALLY great about him is this. However, he let himself down a bit here, and by the end I was feeling a bit the other, but with a bit more yada yada this act could be way up there.

Forgive the need for précis; Alpern is a reviewer who has language very much at her command, and where she makes cutesy comments she doesn’t bang them home with a mallet. Straight out of the traps she says that Peacock and Gamble’s Heart Throbs “pulsates with silliness”. Nice.

Occasionally she overplays her hand. Shirley and Shirley “promise carnage and they deliver it to an extent,” she says. “With sharper, pointier spears however, the comedic butchery could be complete.” Alas, you don’t butcher with spears, Alpern. Knives, cleavers or hatchets. Spears are for hunting. Believe me: I’m an elephant.

Sometimes you’re not sure if she is aware of the humour inherent in her statements. When she tells us that Vicki Stone “did strip off at one point for a ‘dance break’ and she did also ride a llama across the stage on a skateboard, still there were several moments where Stone did not seem completely at ease on stage” you think: “What do you want, Alpern? Blood?” And indeed she is a bit of a three-star stick in the mud.

But then, if she’s fussy she’s fussy. At least she tries to be accurate. She’s a spear-hunter rather than a hatcheteer. 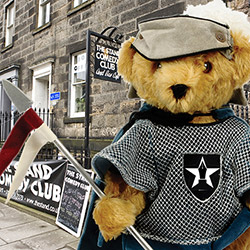