If you can imagine the art of performing comedy as something akin to spreading silage on stage, then you’ll understand the default position of James Hampson – he’s at the back of the room in a protective mac and gaiters, grimacing, with a peg on his nose.

Reviewing’s a dirty job, but someone’s (apparently) got to do it. And Hampson approaches the task with all the joie de vivre of a supply teacher heading to a failing inner-city comp on a cold Monday morning when he reviews Distraction Club. Hence he tells us that he saw Phil Nichol perform “a genuinely unpleasant song”, followed by Kate Lucas knocking out “twee songs about hating people”. He then dismisses Donnie Donkins without seeming to know, or care, that Donnie Donkins is Barry Castagnola. When he closes by stating “Arthur Smith closes with a bewildering set of Leonard Cohen songs, played almost straight-faced” you want to ask him whether he understands variety. Actually, fuck that – does he understand entertainment?

Hampson does what hundreds of bad reviewers have done before him: berate the venue. “The Caves is such an unpleasant venue: it takes ages to file in, it’s hot, there are two toilets for 100+ people, water drips down the walls, and the air can’t be too good for you”. Yes, Hampson. And you didn’t even HAVE to be there. As well as hating anything that smacks of being un-PC, Hampson takes the trouble to explain what a good, perceptive reviewer he is. “At the few points [Ed Aczel] gets close to traditional comedy I’m disappointed,” he says. “I hope he keeps on bombing, but to packed rooms”.

It’s just possible that James Hampson is haunted by an unhappy childhood. After watching the Free Fringe show Dead Famous he mutters darkly that was “reminiscent of those nights when your parents get drunk and start making lame jokes for longer than is welcome, then start bickering, and eventually drift away to your peaceful satisfaction”. Oh, THOSE nights. Yes, we all know what those nights are like, Hampson (Looks at nearest person, shrugs, twirls finger around ear, points at Hampson). 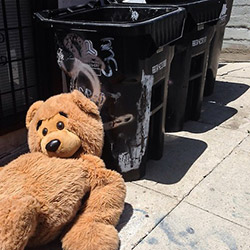