Justin McCarthy doesn’t so much write reviews as retch words from every orifice. Like someone with lexical norovirus the deluge flows from both ends of his points of view, creating a big mess all over the page. “Simply the most bizarre show you will ever have the unfortunate and detrimental privilege to watch” he writes of Luke and Harry’s Journey to Sex Colony 01. Thank goodness for the star system so we know whether he liked it or not.

His worst crime is the belief that simple words just won’t do; his reviews are alive with the sound of a child flicking through a thesaurus. Thus each paragraph is littered with ambiguous, ill-fitting words that struggle to give any sense of what’s going on, besides the maelstrom of puberty, in McCarthy’s head.  “An entertaining yet highly prurient act,” he writes of Martin Mor. Mor is many things (including downright filthy) but he is not ‘prurient’. Paul McCaffrey’s show “ended with a punny song that coagulated and neatly presented an overview of the night’s material”.  Concluded? Compounded? Who knows: McCarthy is the sort of reviewer who would write about the aroma of dogshit and the cacophony of angels.

He can’t write and he has no idea what’s going on. And he has a face you want to punch, but at least that’s not his fault. 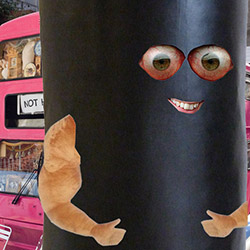