Okay, I think I can guess what happened here. Isla reviews theatre. She doesn’t know much about, or care for, most comedy, but she likes Bo Burnham. REALLY likes Bo Burnham. So she says “Hey, can I cover Bo Burnham this year? Come on, I’ve been to ALL THESE really boring plays for you and I really want a night off. I’ve already written the first line: ‘Bo’s back. And he’s better than ever’.”

Thus van Tricht has produced just one comedy review. For Bo Burnham. Is Bo Burnham worth five stars? Absolutely, yes. He is even worth the five stars of a reviewer who had gone FOR THE PURPOSE of reviewing him, rather than as a reward or a mid-Fringe holiday from the grind of having to constantly assess things. Should people volunteer to see the sort of things they like? Absolutely, yes. The SORT of things they like, not the EXACT thing they ALREADY like.

Reviewers of theatre, dance, photography, Japanese kabuki theatre, puppetry or whatever the fuck else they assign a category to in the Fringe brochure should stick to that discipline and keep their stinking great beaks out of comedy. Is it too much to ask that something marked in the brochure as ‘comedy’ should be reviewed by someone who understands and appreciates comedy, rather than hived off as a free-pass jolly to some journeyman pillock? Because, while it may seem quite benign when it’s a five-star gush like this, it can just as well be a one-star assassination when the luvvie lummox doesn’t quite know what it’s looking at.

So I’m not giving van Tricht a score; she’s not a comedy reviewer and I will resist any accreditation that would make her appear as if she is one. I’m sure she’s brilliant at assessing whether you should or shouldn’t go and see a play at the Fringe (personally I’d advise you shouldn’t but then I don’t understand theatre and I keep my big blue trunk out of it). But comedy? No. Down with this sort of thing. 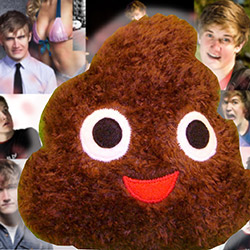