I doubt that anyone else out there has read as much Fred Fletch as I have, for the simple reason that Fred Fletch is the most irritating reviewer that has ever lived, or will ever live, in this universe or any other. I doubt anyone else has got past a single paragraph.

“He makes the Underbelly his bitch, utilizing the lights, atmosphere and precisely zero-fuck,” says Fletch of John Robertson performing The Dark Room. “It’s hard to describe,” he says. It isn’t, actually, but Fletch is certainly not up to the task. His review is a wittering prattle of crap that gives not the vaguest clue what the show is about and at one point includes the phrase “ass-hammer a woman-shaped clothes horse” for no reason whatsoever except that he really wants to shock you.

Mostly what Fletch writes is just unsifted rubbish: “If someone thinks Funky Music by Wild Cherry melds seamlessly into Sweet Dreams by Eurhythmics, stay clear – that guy clearly wants to lay his space-eggs in your thorax.” “Previously it was a whirlwind trip through mind-reading and easily-sunburned Harry Pottery. This time he flexes his comedy muscles over whatever bag of cat intestines and wolfbane [sic] that gives him the power to guess cards.”  Occasionally, though, his sebaceous glands leak into his brain and he just turns desperate. “Sure, he does requests, but like strippers, if you want him to hammer-dance or cry softly into your crotch, tradition dictates you slip him a fiver.” Grow the fuck up.

Sorry, it’s catching. Fletch peppers everything with the word ‘fuck’, or else ‘goddamn’ and ‘ass’, like a teenage boy who has just heard an album with a parental advisory sticker on it. Actually, forget the word ‘like’. Fred Fletch is precisely that. In a comedy landscape where dozens of young performers try too hard to be edgy and are punished for it by reviewers, who decided we need a reviewer who thinks he’s Andrew Dice Clay?

Fred FletchWriting for THE SKINNY (Reviewed in 2014) 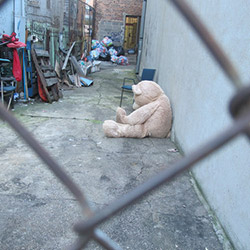