Frankie Goodway seems to be given a lot of work by Broadway Baby; it’s good to see that they recognise a good writer when they see one.

Many reviewers try to evoke broader themes from their wry generalisations, and almost all of them fail abysmally. But Goodway shows how it’s done: “The show concludes with an interactive game of Where’s Wally, which … was won by a troupe of scouts. It’s a shame that the show as a whole takes on the same format – a few great jokes trying hard to hide in the background.” Crikey! I’d hate to be reviewed by Goodway. It’s often easier if you can just write the critic off as an idiot.

Sometimes she overdoes it, as she does with A Good Catholic Boy: “There’s a good – if pious – punchline somewhere in the biblical mess that makes up the first ten minutes but his exceedingly poor timing condemns it and he then crucifies with repetition. There is no miraculous resurrection to follow”. Overkill, Goodway. Like St Peter you’ve damned it thrice.

She also tends to over-explains things that don’t particularly lend themselves to explanation – the tangential escapades of an improvised comedy show, for example. Here she tells us all about a skit involving fish people which, we assume since it’s improv, never happened again.

On the whole though, Goodway mentions tone, pace, audience engagement and shifts in mood the way an old-time theatre critic (ie, a proper critic) would. And sometimes – such as her review of Adam Hils’ Happyism – the review is a rollercoaster of emotion in itself. Despite odd statements such as “no stand-up has ever made me laugh with such inhibition”, phrases like “there were tears in my eyes when he announced he was starting to wrap up” should never be discouraged in the dark art of reviewing. Skill, and humanity too! 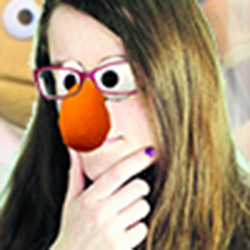