Jennifer McKiernan writes short, concise reviews that pretty much get to the point and reach conclusions that are, in the main, fair enough.

Refreshingly she talks to readers as if they do actually want to know her opinion. “Funny enough but not hilarious”, “a good solid hour” and “well worth seeing” are straightforward statements that more pretentious reviewers would consider far too accessible. Too many of these people, it seems, want their writing to be viewed as some sort of unimpeachable truth rather than what it actually is: the opinion of one person in a hot room who’s seen six shows that day already.

As such, McKiernan’s seems dependable enough, although thoughtless writing in places means you find yourself questioning her statements as you go. Apparently Moving is a show by Jessica Fostekew about “the various sofas and shared flats she’s inhabited” (she lived in sofas?) Of Rory O’Hanlon she writes that he “is unfortunately quintessentially Irish” (schoolboy error!), with “his lovely accent” (Hmmm that’s not patronising at all to be sure to be sure). Nathaniel Metcalfe is “closer to your favourite geography teacher than the stereotypical raconteur”. Perhaps it’s just me (and I am, as you can see, a leopard) but I didn’t have a favourite geography teacher; they were all dicks who drove rusty Volkswagens who also taught PE. Similarly the word ‘raconteur’ is not one that forces me to repress a flood of stereotypes.

To mangle her own vernacular, McKiernan is solid enough. But you wouldn’t bottom a battleship with her.

Jennifer McKiernanWriting for THE SKINNY (Reviewed in 2014) 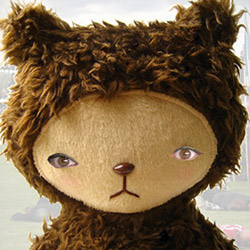