This tired old Fringepigger started out not liking Emma Newlands. But that’s largely because the term ‘self-deprecating’ winds me up for reasons I have explained to death. So: “Reviewers always describe me as self-deprecating, says Angela Barnes, just as this reviewer had written those very words down.” (WHY? WHY HAD YOU WRITTEN AN OVERUSED BIT OF HACKERY DOWN AS YOUR FIRST CONSTRUCTIVE THOUGHT?) “But it’s hard to think how else to sum up her set” (WELL THEN YOU’RE IN THE WRONG BLEEDING JOB, LOVE).

However it turns out Ms Newlands has reviewed Spencer Jones and actually understood the fellow’s mind-bending clownery. And she doesn’t even get showy-offy about it. Her appreciation is candid, precise and sympathetic of his world “where nonsense rules and the truth regularly cuts through more clearly than in the outside world”. She lightly mentions that his outfit is skimpy, whereas some gibbering arse at Fest Magazine thought it necessary to explain that you could see the shape of his penis. Newlands is not an unpleasant person, and her manners do her credit. So I take back all those shouty capital letters. And the casual sexism at the end. Sorry. I am an older elephant.

I wasn’t so keen on her writeup of Sooz Kempner, however. It starts by making no damn sense. “Like tightrope walking and bomb disposal, character comedy requires precision to achieve its ideal goal: to subvert!” Surely the point of tightrope walking AND bomb disposal is to not die violently? Neither was I certain that a show of four successive character acts is “satire-by-numbers”, because it just isn’t. It’s a show of four successive character acts. Her review of Tobias Persson, though, was fairly sound and reasonable with just enough of the chatty commentary that sometimes gets away from her.

Emma Newlands is a difficult reviewer to assess; by turns drily perceptive and mildly annoying. She has a lucid, natural style to her writing but she needs to stand out of the way and let the thing she’s reviewing speak for itself a little more. And stop telling us that things are something they are not. 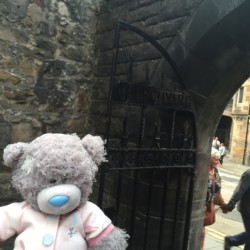