Marni Appleton isn’t a terrible reviewer – let’s be clear about that. She lays out very clearly what the viewer can expect in broad strokes, and her prose is clear and unjumbled. That may sound like faint praise, but we’re talking about Broadway Baby here, where every writer with basic literacy skills is like a little gift.

It’s just that her appraisals show little flair for the ‘creative writing’ she’s apparently studying. In fact they’re rather plodding, dot-to-dot reductions of what was on her plate, to the extent that you find yourself reading them in an adenoidal monotone.

It’s good to know that Felicity Ward is “self-deprecating, inspiring, silly”, but can’t you offer us something a little more insightful, Marni? Something that gets under the skin a bit more? Similarly, the fact that the jokes were “well-timed” and “well-observed” still doesn’t tell me what sort of jokes they were.

Appleton seems to be missing the bigger picture here. The title What if There is no Toilet? is a bathetic piss-take of the existential question “What if there is no heaven?”, or “What if there is no God?” Ward is praying over a toilet in the picture, so the irreverent intention couldn’t really be clearer. Is that funny? Is it offensive? I’m not telling Appleton how to feel about it, I just want her to mention it. And I want to know how this title serves the show.

Other bits just ring a bit odd. For example, Appleton tells us of Goodbear: “There is a surprisingly large amount of death in this piece – particularly of women. Although most of it was funny, by the time we got to the sketch describing the drowning of one of the character’s wives, the female death count had begun to make me feel more than a little uncomfortable.” I wonder how many imaginary female deaths should be allowed per show, and whether Ms Appleton thinks there should be a quota? I’m guessing she just noticed something and, rather than feeling an adverse reaction, decided she ought to have one.

So when she says “you have to laugh” at something, I’m not convinced that I do, and when she tells us that something is “brilliant”, I’m not sure it’s any more brilliant than when you find seagull poo on your car and you say “Oh, well that’s just fucking brilliant”. Except that there would be a bit of passion in that. And real depth of feeling, for all her unthinking hyperbole, is what Appleton is perhaps missing. 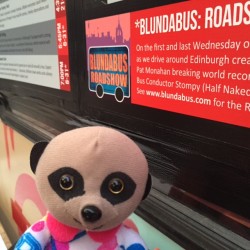