We at FringePig often bemoan the lazy reviewer who, either uncertain of their own credibility or unwilling to condemn a show outright, signs off a review with words to the effect that it’s okay if you like that sort of thing. Yasmin Sulaiman, though, is the first reviewer shameless enough to say that precisely. Joanna Neary is apparently “well worth your time – if you like this sort of thing”.

Indeed, throughout this review you’re willing her to have the courage of her convictions. When she says that Neary’s show is “not a surefire crowd-pleaser by a long way” that seems fair enough except that, by day six of the Fringe, Neary will still be finding her crowd. But the next line is just annoying: “But if your humour leans towards the quirky, and your sensibility to this side of vintage, it’s enrapturing”. Whereas she could have said “quirky, anachronistic and enrapturing”, Sulaiman opted to make any potential rapture subject to the dubious possibility that the reader likes quirks or anything ‘vintage’.

This tendency to make her vignettes of praise fight each other like foxes in a bag can be seen in her knowledge of the earlier work of Neary and in her review of Lazy Susan. In both cases, the older stuff was better. Her Lazy Susan review begins: “There’s no doubting the talent of Celeste Dring and Freya Parker”; the word ‘talent’ really requiring italics. There’s no doubting their talent, but Sulaiman is about to explain why it only adds up to three stars, which is pretty much all she’s prepared to give anything; even Matt Forde’s Let’s Get the Political Party Started where she lavishes nothing but unfettered praise.

She complains the Marcus Brigstocke’s monodrama, Fully Committed, is anachronistic because all the women in it are unpleasant and ‘whiny’, as if a play with whiny women was somehow a concrete value statement about ALL women. It’s hilarious that Marcus Brigstock should suffer friendly fire on his PC credentials, and testament to how hungry people are to score points by sticking up for imaginary victims.

Not that Sulaiman ever nails her political colours to the mast. She doesn’t like that sort of thing.

Everything is good IF you like that sort of thing. We understand that. But what we need of Sulaiman is for her to tell us that something (ANYTHING!) is unimpeachably brilliant or irredeemably dire without weaseling around it with ifs and buts and on-the-other-hands. We understand that in a universe of limitless perspectives, tastes and sensibilities a gut response may be open to question and qualification. But for goodness sake, Yasmin, just feel something with your heart. 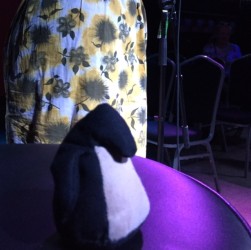