Sometimes you just want to tell Dave House not to get so overexcited. Sophie Willian: Novice Detective is “about as good as you can reasonably expect”. And Jenan Younis will be glad to learn that “the short length of her show means it remains quite fun throughout and never drags”.

This may, however, just be a side effect of House being overly thoughtful. He uses the term ‘head scratching’ twice for Dan Jones and, despite awarding his show a star rating, never truly makes up his mind about him.

It seems a perceptive observation that it “makes fun of the oddities and occasionally desperate nature of many fringe shows. Unfortunately it’s almost as much an example of one of these as it a commentary on them.” But then, when you think about it, has a show that draws attention to its own tropes and conceits REALLY fallen into some sort of trap by becoming those things? If this is a valid criticism, then it kind of dooms all meta-comedy to similarly bleak reviews. And is it really the act’s fault if there isn’t enough of a knowing wink for viewers to get the joke? Phil Ellis suffered similar comments until people realised it was supposed to be a shambles.

Well, I’m doing as much head-scratching as Dave House now. And Dave House is certainly a thoughtful reviewer: he seems to have volunteered to review shows by the medical fraternity, but if this is an area of Dave’s expertise he’s remarkably coy about it. The only Dave House I can find out about is a musician who “may not meet Wikipedia’s notability guideline for music”. It seems more likely that he’s just a concerned citizen with an interest in the NHS, as he comments that there isn’t enough anger for his liking in the two medical-themed shows he sees.

For Jeremy Hunt, And Other Spelling Mistakes he complains that “considering the name, there aren’t that many jokes that refer to the MP”, even though the Secretary of State for Health is “weaved in and out of various gags throughout the show”. One cannot help wondering how much Hunt the average comedygoer really needs in their performance, or how many reviewers reach deeper into the star bag when they hear their own politics being parroted back at them. Although the comment for Younis’s show was nice: “And like the NHS (for now, anyway) it’s free”.

House could be a worthwhile reviewer if he could keep his concentration and not resort to crap puns in order to lazily conclude a review. There’s no good reason for writing “but if you’re on the case, Sophie Willian: Novice Detective deserves your skills of deduction”. And it doesn’t make it better that he knows what he’s done: “Jenan Younis: A Masterclass in Anger Management is humorous but won’t shatter your funny bone (she also avoids terrible puns)”.

There is some good, considered work here but, without improvement, House may not meet Fringepig’s notability guideline for reviewers. Incidentally, he’s spelled Sophie Willian ‘Willan’ in his headline. But then, Tabatha Glancy on The Skinny spells it wrong all the way through her review. So, like Dave, we should perhaps be underwhelmed with joy for life’s small mercies. 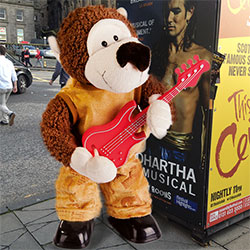