Chris Rumbles is aptly named: his critiques roll noisily through each show he sees, alerting us to the many bumps and ruts. Inevitably, though, Rumble’s own wheels eventually fall off and we are left wondering which was really at fault: the show, or the reviewer driving his coach and horses through it.

That allegory was a little contrived: I apologise. But I hope you knew what I was trying to say. “Sketch shows at the Fringe can be a bit like Scottish football supporters’ adaptations of 80s synth pop songs,” says Rumbles. And at this I was thinking: ‘What, unmitigated shite? A prelude to international disappointment? A hair-lacquered stain on humanity?’ But no, Rumbles has a more prosaic apotheosis in mind: “they’re enjoyable enough but not usually all that original”. Ah. I still prefer mine.

Rumbles puts a little too much effort into making clever connections and using profligate language. Sometimes it pays off nicely, but sometimes it’s a bit of a word jumble. Reviewing sketch duo Lazy Susan, he writes: “The cooking aid-named duo’s acerbic deconstruction of social media behaviour around tragedy illustrates that they should be above such clichés”.

My four problems with this sentence are: I don’t generally know what’s going on in it; I don’t see what, specifically, is a ‘cliché’; it doesn’t logically follow that DOING a bad thing demonstrates that you SHOULD be above doing the bad thing, and a lazy Susan is a piece of tableware, not a cooking aid. There are other problems with it, but four is probably enough for a sentence of this length.

Things like this ring the cretin alarm throughout Rumbles’ reviews, and it’s a shame. Because when he demonstrates his own, ahem, perspicacity, it’s actually rather good. Reviewing Josie Long, he reports that it “can be a similar experience to watching the BBC’s One Show, with handbrake turns aplenty: ‘Thanks to James Martin there for his take on spag balls… And now to Gaza’.”

Indeed, Josie Long is now so elevated in the comedic pantheon that giving her a two-star review is something of a gauntlet-slap across the face of liberal comedy. However his assertion that “the general tone is such that pathos begins to prevail over humour” is perhaps not stingingly unreasonable.

There’s a similar ennui in his writeup of Alastair Clark: “From the outset, it’s par for the left-wing course, with the Tories, New Labour and the Daily Mail the target of Clark’s quirky diatribes”. Is reviewing beginning to turn against leftish whimsy? I think we should be told.

There is a lot to like about Rumbles, and his hiccups are irritating precisely for that reason. Astute turns of phrase abound, such as his admiration for “Novak’s knack for taking clichés and inverting them without succumbing to cliché himself”. With this in mind, Rumbles would do well to ditch reviewer trope-words like ‘self-deprecating’, ‘pedestrian’ and, well, ‘cliché’. Also he shouldn’t follow his smatterings of praise with the coda “that being said…”

That being said (see, how annoying is that?), Rumbles has a lot of potential.

Chris RumblesWriting for THE SKINNY (Reviewed in 2014) 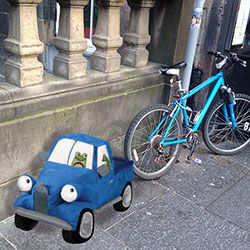