Cayley James is in no doubt that she knows what comedy is, and what must be done to make it better. When she commands that “The Fringe needs more comedians of colour – the overwhelmingly white programme doesn’t lack quality but it does lack perspective,” it surely did not even occur to her that this is of course HER perspective as a white person. Or that, over here, we use the word ‘black’ when we’re talking about black people, rather than some cringing stateside apologia, because we’re all fine with it the way normal people are.

She gets quite angry at times. “Why do some comedians feel like they can waste a platform like the Fringe to hash out dated material?” she storms about Abi Roberts. “Or to make a shallow declaration like: ‘I suppose we’re all just twerking through life?’ Are we? Are we really?”

However, the force of James’s argument is constantly undermined by an insistence on using big words that tubthump like a political manifesto rather than reason like… well, like an appraisal of light entertainment. And the big words are clumsily welded together by some ill-chosen small words, so it’s sometimes like she swallowed a dictionary but coughed it back up in chunks. “It’s almost shocking that he’s playing as big of a venue as he is,” she tells us of Tim Key. “But his ubiquity at the Fringe, as well as on the big and small screen over the past couple of years, has afforded him a dedicated audience willing to be active.” ‘To be active’? Many such twisted and tautologous sentences come crashing to dull and fuzzy conclusions.

Sometimes James is so certain of what she’s saying that she doesn’t stop to consider that the rest of us have no idea at all. Of Tim Key she explains: “As the audience files into the Pleasance Grand Tim Key strolls around the stage, padding about in his sock feet and coveralls. Cheap jazz is playing; the kind of music that you’d expect to score a burgling scene in a slapstick comedy from the 1960s”. Oh, THAT kind of cheap jazz. That’s perfectly clear. Also it’s ‘socked’. SOCKED feet. Don’t tackle the big, cast-iron issues until you’ve taken care of the small, cotton ones.

Even complete non-statements are delivered with a strange sense of portent. “It’s interesting watching someone’s first show” is her opening sentence on Dane Baptiste. To which you want to say “Gosh, is it? IS IT REALLY?”

Cayley JamesWriting for THE SKINNY (Reviewed in 2014) 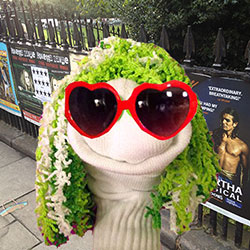