This is my third year of doing the show, each year has been bigger and better so hoping to go three for three with that – it’s just silly fun with jokes, some singing (sort of) and lots of messing about with the audience. There is no message or politics, just about having a good time and a laugh under the Umbrella of comedy.

My first gig was above the George Pub in Central London, was the Showcase of Chris Head’s excellent comedy course which I did just for a bit of fun – it went great and was really fun – probably the biggest rush I have had in comedy despite gigging all over the world in big clubs. Second gig was in a corner of a bar in Ealing with old disintersted men drinking pints at the bar, it was abysmal – I think the promoter left the country and in eight years never seen or heard of him again.

Best review was from the lovely people at Bunbury Magazine who gave me 5 Stars last year, it totally described everything the show was meant to be, was perfect. When I was a new act I was once reviewed by a random blogger who said “Gary Sansome is neither original or funny” I was on with Daniel Kitson that night so perhaps there was strong competition. No one read this so why I am highlighting this I dont know.

In two years I have only been reviewed once due to chance meeting with the reviewer, so not particualrly expecting to be reviewed. If I do get reviewed I will read it though, there is loads of free time in Edinburgh.

I’ve not had a bad review so I love them. As a comic you are instantly reviewed by the audience thats the main review you need. Generally I dont have any issue with reviewers.

He is actually from my hometown I’m surprised he has survived this long with the name Markus. He even said it was a bad thing he was teaching the dog, it wasnt a crime.

I’m a big Sadowitz fan so no, for something totally horrible and outlandish it needs to be done correctly to be funny and I do get why people dont like certain subjects being covered but people should be free to joke about what they want, few comics can get it right though, but people are also free to say they dont like it as well.

I remember doing the odd silly joke when I was just starting but i’m not really an ‘edgy’ comedian. I had a crowd turn on me for making a joke about Paisley in Glasgow so that was too far that night!

Been some great ones, doing Carolines in New York, a packed outdoor ampitheatre in Western Australia but my best gigs would have to be doing ‘Bald Man Sings Rihanna’ on Saturdays in Edinburgh last year – packed room, totally unexpected audience interaction with people from all over the world, cant beat that.

Find Gary Sansome on the web - 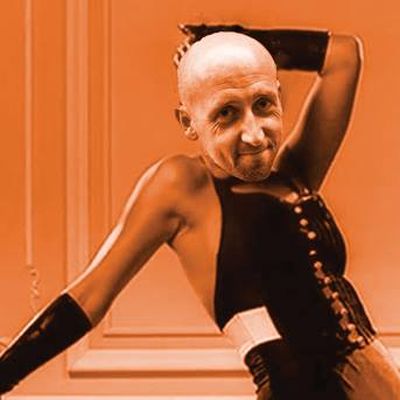 Find Gary Sansome on the web -

When I was a new act I was once reviewed by a random blogger who said “Gary Sansome is neither original or funny” I was on with Daniel Kitson that night so perhaps there was strong competition. No one read this so why I am highlighting this I dont know.