this is an article from 2018Reviewer (and Libel) Roundup

This article was first posted on Tuesday, August 14th, 2018 Filed by Mister Kipper

Every year thousands of attention-seeking wannabes with little talent descend upon Edinburgh to expound their misinformed observations in the hope of fame and fortune. And that’s just the reviewers! Hahaha! Sorry. Right, so here is our roundup of what the Fringe reviewers have been up to since last we met…

Streisand effect
Our source at the Scotsman tell us that reviewers on that ancient tome have been told to abide by a strict new rule this year: if anyone criticises their reviews, on any medium, they are not to respond. This comes after the rumpus between Fringepig and Scotsman reviewer Paul Whitelaw in the closing days of last year’s Fringe. Whitelaw had rubbished the efforts of a series of acts, mostly female comedians, in a tranche of single-paragraph, one-star reviews. They became such a part of Fringe lore that his victims even put together a special show for charity called The Paul Whitelaw Experience.
Fringepig publishes reviews of reviewers online, and our piece on Whitelaw expressed dismay at his pillory pieces. This so incensed Whitelaw that he fired a barrage of tweets calling us “incompetent, hateful, agenda-driven amateurs”. As true as this may be, nothing quite fires public interest like a reviewer blowing up in public about his own bad review. Our lonely website recorded more hits in th e next few hours than it had seen in the previous four years.

Horses’ mouths
A lot of people (us too) were knocking out pre-Fringe interviews this year. (Scandalously, Broadway World charges £10 a pop.) Three Weeks editor Caro ‘Holy’ Moses was first out the gate with a sprawling, 1900-word interview with… Caro Moses. Needless to say, she gave herself the full Paxman with tricky questions like “What is your role at Three Weeks?” and “How do you pick who to interview?” – the answer to which seems to be “Start with the person you most admire”.
The self-reference cake, though, goes to Steve Bennett of Chortle, who has quoted himself as an inside source on 48 Chortle stories in the past two years. You’d think Steve Bennett would be a fairly consistent spring for Steve Bennett to draw his Steve Bennett news from, but it seems that Steve Bennett has gone flaky. In 2012 following a very trolly Chortle ‘Correspondent’s Piece’ entitled Women or Rape: Which is Less Funny? by Mike Sheer, Steve Bennet told us that Steve Bennett was “surprised by the strength of the reaction” to this, adding “I would have thought it impossible to take the obscene opinions espoused seriously.”
Last June though, Steve Bennett found that he had run out of patience with unserious rape jokes. “Comics joke about their colleagues being raped”, announced Steve’s headline. His ire was focused upon a podcast by Gavin Webster that featured a phone-in with Dave Longley, who claimed, as a joke, that he was getting raped every time he left the house.
Dear reader, this is not my colour of humour, but the Devil’s in the details. The jokes were meant as a pisstake of Steve Bennett’s well-meaning ‘comedian safety survey’. Steve Bennett’s claim that they were laughing at the rape and murder of Australian comic Eurydice Dixon are, as they say in Scottish courts, Not Proven.
If Steve Bennett disagrees with us he’ll no doubt send Steve Bennett to ask Steve Bennett for a quote.

Crumbs!
Fringebiscuit is a reviews website that tweets its reviews. The deal is, you give them a free ticket and they will spend 20 seconds on their phone having an opinion about the show you’ve worked all year on. Then they’ll ‘try’ (their term) to give it a couple of paragraphs online. Five shows got written up last year; the previous year they managed 12. And the year before that they weren’t here because their appeal for free accommodation went unheeded. There are extensive biographies of their eight stalwart journalists though, and a crop of exciting articles on ‘the Biscuiteers’, keeping us informed of the exciting things they are planning to do when they’re less f*cking busy.

Demeanies
One of the sternest reviewer-review backlashes we received was for an appraisal of a cub hack at Edfringe Review. One of these brickbats was from one (and only) Francis Monaghan of Stirling, who wrote to accuse us of “shallow bullying and petty mockery of minor mistakes.” He adds “Whoever wrote this must have a really pathetic life to try to demean a young girl trying to break into journalism.” Well all this is true of course. Our lives are quite pathetic. But who is Francis Monaghan – this knight, this Prince Valliant? It turns out the name belongs to a bloke who scarred a woman for life by throwing a bottle at her at a nightclub in Dundee, but escaped an assault charge because the judge accepted his defence that he was trying to hit someone else with it. I’m not saying GBH disqualifies you from criticising others: of course not. I’m just saying it slightly undermines an argument against bullying.

Everyone’s got one
This year, an online review for Brooke’s Bar from 2012 did the rounds on Facebook, having loitered unnoticed on the internet for years. Brooke’s Bar is exclusive; you can only get in there if you’re a comedian or if you know a comedian. Or a joke. Anyway six years ago Fest editor Ben ‘Tell It To The’ Judge brought a friend along to Brooke’s. This friend reviewed all the comedians there, saying they seemed “like arseholes” to her. Finally, a Fest review (though proxy) written in plain English. But we hope the mag’s current boss, Evan ‘Worse’ Beswick, has put an end to such moonlighting. You can either work for Fest OR you can have friends.

What a gent The List’s chief theatre hack, Gareth K Vile is! Some time ago Fringepig reviewed Yasmin Sulaiman from The List. We gave her two and a half stars and criticised her inability to have a solid opinion about anything. Apparently she was saddened by this, so – to cheer her up – Mr Vile showed her his own Fringepig review, which was much, much worse. You might even call it excoriating. Fringepig has, of course, never actually reviewed Vile; he’s a theatre person and we don’t know enough about theatre to needle its reviewers. It wasn’t us that said “Vile roams all over the arts, spilling his onanistic seed over anything he sees”, but we hope it cheered up The List’s dejected soldiers.Vile’s ersatz FP review is badly written, verbose and not at all funny, so it reads uncannily like one of ours.

Scraping the barrel of laughs
What on earth is going on with The Scotsman’s Kate Copstick? She started this Fringe with a furious rant on social media at Paul Sinha, Reginald D Hunter and Andrew Maxwell for not letting her into their first previews. Her tone was one of sheer disbelief and fury that she should be turned away. Paul later oiled the waters by telling the Observer “To Copstick’s credit, she spends time looking for unheralded talents and acts people have not heard of,” and that was that. But now Copstick has followed up with a curious piece in the Scotsman claiming that ‘struggling circuit comics’, ‘unknowns’ and ‘nether regions’ comedians – also known as 99 per cent of the industry – have been all over Facebook jealously demanding that comedians who appear on the ITV show Britain’s Got Talent be ‘banned from the circuit’. Well we’ve looked and we cannot find any such thing expressed on social media by any comedian we’ve actually heard of. But two questions occur: 1. Has it come to this, Kate? Scouring Facebook for something to hit comedians over the head with? And 2. Are these denizens of the netherworld the same ‘unheralded talents’ that play Oliver to your Fagin? 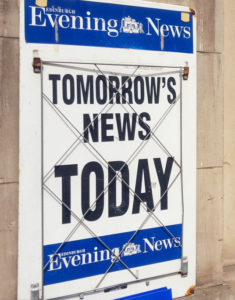 Bi-lateralism
First Fringe Saturday can only mean the Pleasance Press Gala. We must forgive Copstick her sins (a bit) for daring to be in the middle of Cirque Berserk’s motorbike globe of death. But before that our friend Richard Stamp of Fringe Guru was live-tweeting the whole thing. “We start with stand up from Catherine Bohart, who’s tackling the groundbreaking and little-discussed topic of being gay,” he sniped. Then he tweeted “Sorry, in fact she’s bi (she revealed that later). And I shouldn’t have been catty about it, because it was a very funny set”. Then, when Felicity Ward appeared, he exclaimed: “It’s been a long week and my well of halfway-insightful things to say about standup has run dry … I laughed a lot. Will that do?” Three minutes later: “Of course, as soon as I’ve said that it goes a bit dark. I feel bad now.” The Edinburgh Evening News used to sell itself with the motto ‘Tomorrow’s news today’, which was bollocks, but ‘Comedy reviewed before the denouement’ is almost as bad. To be fair to Richard (who we quite like), he says he won’t live-twit anymore. 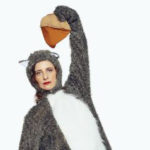 Nut right
Is it too early to do stupidest review comment of the Fringe? Mark Monahan of the Telegraph said of Felicity Ward’s Busting a Nut: “This is comedy perhaps more for audiences than critics” (three stars). GET YOUR PRIORITIES STRAIGHT, PEOPLE!