Last year, Arianna Reiche did a typically Fest thing: slating Al Lubel when almost everyone else thought he was quite magnificent. The critic two-starred her fellow American for being too confessional about his drawn-out toilet training. Yes, an American told another American that he was sharing too much. Weird shit happens at the Fringe.

She does the same thing this year, saying of Joz Norris that the “insight into Norris’s psyche begins to make us feel a tidbit voyeuristic. And we’ve still got 25 minutes to go.” It’s irksome that she balks at such a thing when so many other reviewers are complaining that shows lack consequence, profundity or real emotion.

Notwithstanding her apparent desire to keep things impersonal, Reiche is a very good writer. She is let down, on occasion, by sloppy sub-editing (her David O’Doherty review is frankly a bit of a mess), but on the whole her reviews just nail it, combining background knowledge of the act with sharp prose and a keen sense of what is going on in the industry. Thanks to her I will not leave the Fringe without seeing Demi Lardner’s Birds with Human Lips, so vividly does she describe her “succinct moments of startling genius [such as] crisp-packet-hand-holding”.

This year Reiche seems to have broken free of the Fest habit of being a star tightwad. Perhaps she’s seen the best stuff so far, but it does seem that she’s as ready to appreciate an act as undercut them.

I was about to reach deep into my bag of pigs when I read her Tim Vine review. “Without imposing subjective bias,” she says, “it is safe to say that Tim Vine is not for everyone”. Yes, that is safe to say. In fact I would give that statement a kitemark. But Reiche then goes on a rather flatulent flight of fancy in which she imagines that Tim Vine is Satan and all his fans are his demonic acolytes, simply because she doesn’t understand what in hell they’re laughing at.

Two perennial Fringe questions reoccur: Why do reviewers go to see acts whose style of comedy they are already avowedly against? And if Tim Vine is the very devil, why give him three boring stars? An extreme reaction ought to tally with an extreme judgment. Is it simply that, as she acknowledges, hers is “only the opinion of a few”?

Have courage, Reiche. Each review is the opinion of only one person – and a mere mortal at that. But we all behave as if they’re the word of God, don’t we?

Arianna ReicheWriting for FEST (Reviewed in 2014) 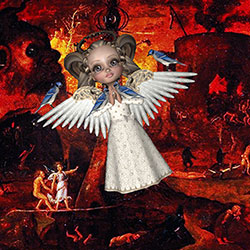