There’s something about Hamish Clayton that’s a little bit creepy. He puts you in mind of Prince Joffrey, or Caligula as played by Malcolm McDowell, so quickly do his apparent affections and sympathies turn to menace.

“It must be remembered that this is a free show and should be judged accordingly. It is certainly better than sitting alone for an hour,” he soothes, in a review of Edinburgh Revue that is an early contender for Fringepig’s Faint Praise Award. “There can be no doubt that the group enjoyed themselves making the show and during the performance, but make no mistake, there is far better sketch comedy on offer at the Fringe.”

I wouldn’t dare to make that mistake. Not when Clayton is so insistent. Just look at how he gets his point across: It MUST be remembered. There can be NO doubt. Make No MISTAKE. It’s hard not to imagine the reviewer thumping a table, upsetting his grapes and wine.

To fit this theme, Clayton has had the photograph for his Broadway Baby roundel image taken in profile, so that it looks like a Roman coin. But it’s important to point out that Clayton is just as insistent in his mercies. “Nothing will change the fact that Wang is a universally likeable character,” he states, in a solemn covenant of such profound importance it was chosen as the breakout text (why is BB doing breakout text this year? It looks utterly crap).

Yet even if Clayton DOES believe himself to be a God, or kills prostitutes with a crossbow, or wants his horse to stand for Parliament, this may all be part of the grandiose force of personality he unleashes on his reviews. Take, for example, this bit where he doesn’t think Birmingham Footnotes are doing Jesus right: “One such example of lost potential comes in the form of Jesus, who needs to be larger, with greater angst and defiance in order for the sketch to unlock its true comic power. In this matter, Birmingham Footnotes could have thrown off their shackles and created greater entertainment through the outright ridiculous. But no, they choose to squirm in the dust like the money-lenders and the Pharisee.” OK, he didn’t write that last line. But admit it, you couldn’t see the gap.

Clayton uses the words I, me and my so often that he almost reads like a psychiatric patient told to keep a journal of his feelings. But what excuses all of this is that Clayton takes his job very seriously indeed and doesn’t miss a thing. It sometimes gets a bit wearing – even at the end of Marcel Lucont’s review he’s STILL moaning that the beginning went on too long. Yet you sense that Clayton views comedy as a thing of life and death, unto all eternity. So fair enough really. 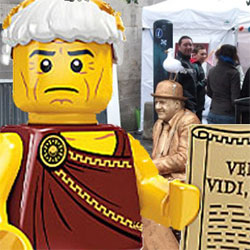