At first it seems that Alun Evans’ reviews are not very good. They seem like very matter-of-fact, unexceptional and literal pieces of prose. And then you remember that this is exactly what reviews are supposed to be like, and that you (and probably everyone else) has been ruined by the review-as-self-expression. The creative writing approach to criticism – love me as I demolish this guy – is now so ubiquitous that we notice its absence far more than we’re aware of it thrusting its crotch in our faces.

See, I’m doing it now. I’m supposed to be soberly discussing the merits of Alun Evans as a reviewer but instead I’ve gone off on some schlocky metaphorical flight of fancy with graphic sexual overtones, like too many student reviewers. And who suffers? Alun does. And you. And journalism.

All Alun does is say what he was expecting, then what actually happened. He notes the things that were good and the things he found disappointing. and then he concludes. Sometimes he will go a bit crazy, such as when he started with “Are you ready to squirm? Oh my, it’s so uncomfortable. ARGH! Lou Sanders brings her own brand of cringeworthy comedy to the Fringe once again.” I thought he was being sarcastic. But that’s because I’ve spent the whole fucking Fringe reading things like Lewis Porteous starting out with “We’re lucky to have Ria Lina”, with the purpose of telling us in a Very Clever Way that we are not in the least bit lucky to have Ria Lina. So you feel your hackles rise at what’s coming next, but nothing is. Alun Evans is just enjoying himself.

He points out the serious parts of the show and why he enjoyed them, before saying “But don’t let that put you off, Lot’s delightfully cack-handed style (or lack thereof) is somehow very charming. Her inability to do convincing accents or sing doesn’t stop her from doing both to hilarious effect.” It’s nice that he takes this breezy approach. And it’s nice that he spelled Lou as ‘Lot’ in a sentence about her being cack-handed.

So, despite being on ScotsGay Evans is the straightest-talking reviewer you’re likely to meet. 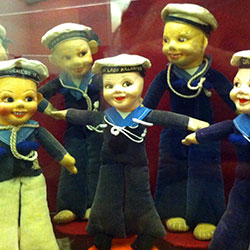