Dave Coates is one of those reviewers who, like a teacher at a long-established school, wants everyone to try their best. And he wants them to be cheerful about it.Jack Barry, for example, “seems self-aware enough that his mis-steps suggest a performer in the middle of a promising learning process”. Coates could have added “Will grow into a fine young man”.

Similarly when Nathan Caton “seemed to run a little haphazardly from one topical skit to the next,” it’s mitigated by the fact his show has a “moral compass”. Coates sees the Fringe as a big classroom where the untutored flock for guidance. He gives the sort of report-card advice (“He doesn’t seem confident of his material or entirely in control of his punchlines and the set meanders, making movement from one passage to the next difficult to follow”) that will be valuable in about two years when the comedian has stopped feeling resentful. But such an approach is perfectly positive.

To adopt Coates’s style, he is clearly a reviewer with a lot to give who will grow and develop as he hones his abilities.

Sadly, Coates lets the comedy school down a bit by continually sticking his oar in wherever his personal politics are challenged. His review of Charles Booth concludes that he is “a talented performer held back by tired and often hateful material.” Hateful is a strong word, and you’d hope to see it justified in the text. But all Coates records is that Booth did some stuff on Rachel Dolezal that he disagreed with.

Similarly Jack Barry is accused of making “unsavoury” gags about suicide, as if this speaks for itself. With Minor Delays he concludes that “Occasionally the bleaker moments come across as slightly mean-spirited,” but again we know nothing of these moments except that Coates found them too bleak. When he lists “numerous grim instances of homophobia, misogyny and cultural essentialism” he starts to sound like a prosecutor in a kangaroo court. And if you’re wondering what ‘cultural essentailism’ is, don’t bother looking it up. You’re not supposed to know what it means and that’s why some people use it. In that moment of not recognising the phrase you unconsciously acquiesce to Coates’ greater knowledge and moral patrimony. If you’re not careful you could be tricked into thinking that his desire to police the boundaries of comedy is perfectly reasonable. And worst of all you’ll be arming yourself with the phrase “cultural essentialism” so you can use it when you want to call people racist but haven’t got quite enough evidence on them yet.

If you regard some things as unsayable, fine. But Coates is a reviewer and I’m just not sure that he wants to feel uncomfortable, or even challenged, for even a moment. If the jokes were poor or the arguments behind them antiquated or illogical then he ought to tell us. But for goodness sake Coates, don’t just shudder and walk away like a dirty skulking reviewer.

That was journalistic essentialism, by the way. It’s a thing. 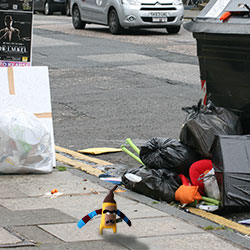