Bruce’s reviews are not really reviews as much as they are opportunities for Zander Bruce to talk about Zander Bruce, in the context of Zander Bruce going to a show. All credit to him, he makes absolutely no bones about this. He is quite shameless about taking up space with blethery preamble: “A few evenings ago, trying to negotiate from one venue to another… just too packed … so we detoured down a side street … I spotted the lithe figure of Isla Dogs on a poster … Continuing on, I wondered if we had uncovered her lair…

Bruce writes for a certain readership and so cannot be compared side-by-side with a reviewer from the Fringe pulp corps. In any event it’s refreshing (especially when you’ve got THIS job) to read a reviewer who has absolutely no regard for journalese and who charts an absolutely unique course through a review, even if that review usually detours via his bottom.

Bruce’s reviews may begin or end at any part of the show and may take in any peripheral subject that occurs to him. Thus his reviews entirely avoid the hackneyed “I arrived, I felt like this, the act came on, I felt like that” tedium of the student notepad army. In fact, even when it does echo those tropes, he is more likely to write, as he does of theatre show 666DSM, “As I sat tonight in the audience I desperately hoped the show wouldn’t be an awkward stinking pile of shit”.

The constant sex references, applied with all the finesse of a paintball gun, can get a little one-note after a while, especially when it’s just braggadocio and waffle. You do sometimes get the impression that Bruce writes everything with one hand down his pants. Still, he gives it a rest for a minute when something important happens. His thoughts on how Ryan Good’s Sex With Animals is “chipping away at some of the remaining taboos we still hold largely as a society” were interesting.

I may not be the best person to assess Zander Bruce as I am a leopard who has only had sex with other leopards, mostly female leopards, and particularly Mrs Business Leopard. Although I did feel a twinge of something when Bruce lusted after (and wrote an incredibly long love-letter of a review to) a man-sized fluffy lion.

Lions are massively overrated. I just want to make that clear. 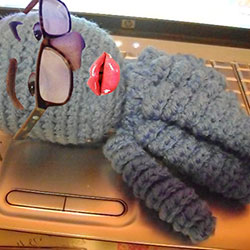