Tom Bragg, the magazine’s podcast editor, is not your usual Three Weeks hack, by which I mean he has very apparent writing skills and applies them skilfully to the publication’s puff format.

I think I speak for my colleagues when I say that, when reviewing reviewers, it’s usual for us to glance at the stars they dish out. When someone hands out mostly ones or twos it tells us something about the attitude of the reviewer to the Fringe. It tells us how realistically they set the bar for enjoying themselves, and how imperiously they regard their own opinions. It rarely tells us about the quality of the shows they went to see.

However, Bragg is the exception that proves the rule, as this year he has set himself the task of reviewing only shows with sweary titles, so his batch of reviews is by no means a random sample. However he does make a variety of awards and write an enjoyable piece about the task for the Week Two edition.

He makes the case, however, that shows using asterisks in words like c*ck and b*ll*cks are feigning their censure, because these words are allowed in the Fringe Guide. However they were certainly not allowed two years ago when the titles of Richard Herring’s Talking C*ck and Stuart Goldsmith’s Pr!ck were thus bowdlerised. If people are still doing so needlessly I expect they are just trying to accommodate the vicissitudes of an irrational and unhelpful Fringe Society.

I like how the first sentence of a Bragg review is always a potted description. It frees up so much of the remaining 120 words for analysis. I’m much less keen on Bragg’s habit of taking the title of the show and twatting the performer over the head with it at the end. “Sadly, this show was half-cocked” he says of Pretending Things Are a Cock. “His testiculation flowed for a bit, but the scrotum of a friendly atmosphere soon contracted, shrinking his bollocks back into himself,” he says of Eric Lampaert’s Testiculating.” And when it isn’t a twatting, it’s just lame: “Join the club if you’re so inclined” is his signoff on Susan Murray’s Fuckwit Club.

I’m also a bit perturbed that The F*cking Nasty Show got one star when he concedes that “The comedians were funny. Just not F*cking Nasty”. I suppose we would all be cross about a tin labelled pilchards that turned out to be peaches, even though peaches are nicer. But I did wonder if, had The Racist Joke Show made it to the Fringe, he would have been as determined to see that one fulfil its nasty obligations. But then of course he wouldn’t have seen it. Not unless it was The Racist C*nt Show. 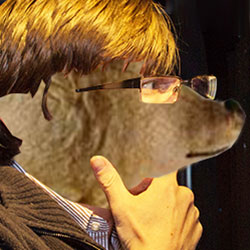