There was a point in Charlotte Ivers’ review of Mark Nelson where I wanted to invent the game Reviewer Bingo, in which the cards would have stock reviewing phrases instead of numbers.

“His delivery is confident and relaxed…” (Yes!) “Controversial enough to keep things interesting, but never oversteps the mark….” (Yes!) “His social observations are sharp, as are his musings on everyday life…” (Yes!) “He has a unique turn of phrase which transforms observations which would have been mundane into quick-fire jokes…” (Yes!) “He is highly likable…” (Yes!) “Refuses to take himself seriously…” (FULL HOUSE!)

The problem is that none of these statements refer to anything you don’t expect of any reasonably adept comedian. Yes, it’s good to see them done well but this is a four-star review that has no lift to it; not one stand-out moment. Like most of Ivers’ reviews it has a desperate shortage of proper nouns, so that no image is left to linger in our souls once we finish reading. It’s just a train of platitudes that ends with “You could do a lot worse with your time and money”.

Well of course we could. We could pay a Broadway Baby reviewer to throw Pom Bears at our genitals while they talk about their dissertation. If the best you can say of a four-star act is that a person can do far worse with their time and money, screw your review up and start again.  For Christian O’Connell she says “You could do a lot better with your time and money”. Wow.

Everything is one thing without being the other thing: Whereas Nelson is controversial without overstepping the mark, Paul McCaffrey is “sentimental without being mawkish” James Loveridge is “shameless, without the sense that he is playing the shock factor for laughs”. I think Ivers needs to become competent without being formulaic.

Ivers is ready and willing to pin stars to most things; she gives a fair few fours and fives. So it’s interesting that Ivers’ best review so far is the one where she only gives Fred MacAulay three stars; perhaps it was the challenge of naysaying such a monolith of the BBC that forced her to come up with something slightly different. “At the risk of damning Fred McAuley with faint praise, this is an extremely competent set,” she begins, damning him with a misspelt name. Similarly Paul McCaffrey becomes ‘McCaffery’ throughout except at the end where Paul McAffery wanders in; Paul Chowdhry is rendered Chowdry.

Ivers is either lazy or just not very good. If anyone was going to hire her as a proper journalist I would say: “Wait! There are better ways you can spend your time and money!” 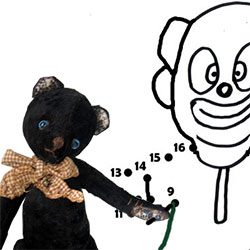