Sharon Geoff is not really called Sharon Geoff but, since we’ve long since given up trying to suss out the surnames of anyone at One4Review we’ve decided to denome everyone as an adoptive child of Geoff (just Geoff) the Editor. Come to think of it we should have called Geoff ‘Geoff Geoff’ for consistency, but it’s too late now.

I quite like Sharon. She has absolutely no idea what punctuation is for and doesn’t intend to find out. Words, sometimes quite important ones, just go missing. But somehow this gives her reviews a conversational immediacy and, once you learn to do without commas and apostrophes and such, it flows in its own way. Sort of like how Irvine Welsh’s books stop hurting your eyes by about page 20.

The main challenge for Sharon is keeping things engaging; sometimes she tries to explain the mechanics of a show and just vanishes into a hole.

“Like everyone Laurence has an internal monologue giving him advice on how to react in certain situations. His is known as chip and he imagines him to be in the guise of a monkey, who is every bit as mischievous as Laurence himself. Chip’s name is not derived from “chip on your shoulder” as you might think, no it’s just because Laurence likes chips…” Paragraphs like this rattle on about the nuts and bolts of plot points and devices that are really not important. The description of a voting procedure in Anna Morris’s show was about as interesting, and as comprehensible, as having proportional representation explained by an auctioneer in spate.

But when she likes something her lack of guile really makes it genuine. “I absolutely love Al Lubel and his quirky style of comedy but not everyone appreciates him,” she warns. “The crowd on the night either loved or hated him, there really was no in-between. The majority laughed their way through the hour but some never cracked a smile at all, at anything he said.” Got it. And it may seem rather over-egged. But so much reviewing these days ignores the rest of the audience completely, as if the reviewer is so Godlike they could review the show just as well if it were bottled in aspic.

Sharon doesn’t make that mistake. Plus, she wants people to be comfortable. “Perhaps a bit research before buying a ticket would be an idea,” she says. 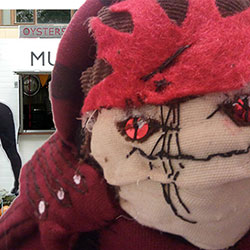