Vyvyan Almond’s sentences are quite over-constructed. They sometimes take so long to reach their point that reading his reviews puts you in mind of a Dickensian preamble. And Dickens, as we know, was paid by the word.

That’s not to say that Almond writes with the wit or pathos of Dickens, of course. In fact I found it difficult to read his reviews in any voice other than Matt Berry playing Douglas Reynholm: “Paul G. Raymond and Luke Manning grab their audience from the very start like the most British of bulldogs, and though they may shake them, they never let them go.” Hell’s horses!

In a similarly Reynholmian manner Almond then over-explains why it doesn’t matter that one of the two comics that comprise In Cahoots isn’t white: “While they make good use of their obviously different ethnic backgrounds, they do so with a commendably light touch, addressing the issue of race-relations directly but never allowing it to define them. Indeed only two sketches in the whole hour even approach the subject and are both absolute gems.” Did it ever occur to you to just not mention it? I mean, who cares?

The fact is, Almond is not on quite the same planet as the rest of us. Of Battle Acts he tells us: “The compere – a dark-haired, confrontational man – took the opportunity to swear freely at his audience. He did this rather awkwardly, however, and it contributed little to the humour of the evening.” Most of us would have settled for “The compere was too sweary”.

Almond is eager and quite appreciative, giving out stars to things even while over-analysing them in sometimes inappropriate ways. But his prose, though clunky, does the job and always makes sense. We would be happy to award Almond a middling clutch of pigs were it not for the fact that he is reviewing the sketch and improv of others while performing his own sketch and improv, Voyage of the Narwhal, at the Caves.

Rarely does Fringepig see such shameless double-fisting as this. But it gets worse. Voyage of the Narwhal has been reviewed, but only by one publication. Can you guess which one?

Yes, by Broadway Baby. Almond’s colleague Milo Boyd went to review it. “The Voyage of the Narwhal is the first Edinburgh show by Alexander Fox, Vyvyan Almond and Ralph Jones” he explains. It is “pacey” and “wonderfully absurd” and worth a (thoroughly deserved, we’re sure) four stars. I’m sure Almond doesn’t see anything wrong in this, but then that hardly speaks well of his instincts. This sort of thing just beggars belief.

I tell you what, Broadway Baby, why don’t you let ALL the comedy acts at the Fringe write comedy reviews about each other? I mean, if some of your flunkies are going to lurk at the back rubbing sugar on each other’s arses, let’s make sure there’s enough for the whole class.

A serious review crime has occurred. We can only hope that Almond gets an appropriately long sentence. 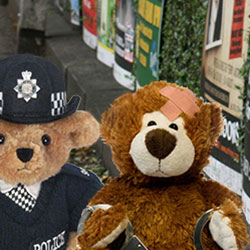